1 Downfall of the Human Drivers, or How Technology Is Making Them Redundant

5 Uber Promises Its Self-Driving Cars Will Be Cheaper, Safer, Better
Car video reviews:
Up Next

2021 Mercedes-AMG GT Black Series – What We Know So Far

That Cruise, GM’s autonomous division, was looking into making a car that would feature no steering wheel, pedals or mirrors has been rumored since 2018. The rumors came true on Tuesday, during a San Francisco event where Origin made its first public appearance.

Some hours prior to the big demo, reports on social media were talking about how the new car would be fully autonomous – we’re talking Level 5 autonomy here, since industry insiders were already saying it wouldn’t even include a steering wheel. Cruise half-confirmed those reports by saying that the new product would take us “beyond the car.”

Beyond the car, it seems, is Origin. It’s a mini-bus, shuttle-type of vehicle that can seat up to 4 passengers, 2 on each side, facing each other. Though it looks bigger than a car, it’s actually about the same size but it’s more spacious because everything pertaining to the actual driving has been removed.

Origin drives itself. Cruise does not include the possibility for a human operator to be there for safety reasons.

“The Cruise Origin is powered by a brand-new, all-electric platform built by General Motors. It’s got what’s called redundancy, meaning there are no single points of failure across sensing, compute, networking, or power — because there’s no backup human driver,” Cruise CEO Dan Ammann says. “Its multi-layered sensor suite is designed to keep track of multiple people and objects – even if they’re far away, in pitch-black, or hidden by rain or fog.”

While touted as the car “beyond the car,” Origin is not a car you can own. It’s an “experience you share,” Ammann continues. Unlike regular, privately-owned cars, Origin will not spend 95 percent of the day sitting abandoned in parking lots, but spend the entire day on the road, ferrying passengers across cities.

This way, it will be more useful and less wasteful. Also unlike regular cars, Origin is modular, so whenever something needs improving or changing, it can be done easily, quickly and with small production costs.

Origin is electric and Cruise estimates it will have a lifespan of 1 million miles. Add to this the fact that Cruise estimates total production cost for it will be considerably lower than for SUVs, and you get a vehicle that seems to be the solution to problems like traffic congestion, lack of parking spots and air / noise pollution. Thanks to its sliding doors, Origin will also be safer for cyclists, as they will no longer run the risk of being hit with an opening swinging door.

For passengers using it, Origin will also be cheaper. Ammann estimates car owners or frequent users of ride-sharing services will save up to $5,000 a year. In return, they will get consistency, extra safety and utmost comfort.

“Origin means beginning. Or in this case, a new beginning for transportation – one with no more tradeoffs,” the Cruise CEO continues. “What’s good for you is good for the world.”

At the San Francisco event, Cruise stressed that Origin was not a concept vehicle but a production model. Initial plans had it on the roads at the end of 2019, but they were delayed so Cruise could further work on the self-driving technology and network for Origin. Production will take place somewhere in the U.S. GM, Honda and SoftBank are partners on the project.

That said, Cruise didn’t go into the specs of Origin – not even to announce an estimated timeline for when it could get out on the streets, or to mention whether it will work on pre-determined routes like city buses or move independently like Ubers and Lyfts.

Despite enthusiastic response at the same event (see the video at the bottom of the page), reactions have been mixed in the media. Trade publications are holding off on passing a verdict until more technical details are made public, but social media is riddled with criticism about Cruise “innovating” the auto industry by bringing back… the horse carriage. Horse-less.

Here’s the presentation, to help you form an educated opinion about Origin. 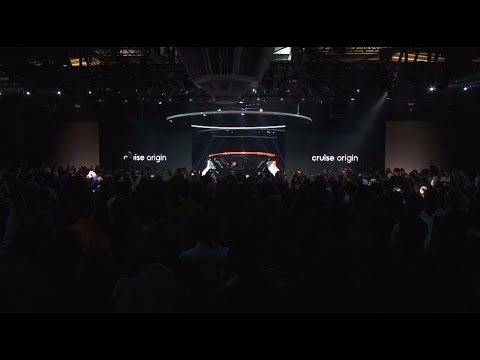