1 Next BMW 7 Series Could Make Do Without V8, V12 Engine Options

The BMW 7 Series grille gave rise to a meme war on social media, with some suggesting that in a few years, the whole front end will be one giant double-kidney. While the design change is surely not a classy one, we think BMW's decision was justified.
3 photos

You see, large executive sedans aren't doing as well as they used to, losing sales to their SUV counterparts as well as EVs. No rapper or budding basketball player wants his first car to be a normal Benz or Bimmer.

But the companies can't give up on these flagships yet, not until they have something better to take their place, so the 7 Series had to be more extrovert and outspoke during its mid-life facelift. It's now that cool uncle who visited the world versus the successful but quiet dentist.

During testing, we've often said that the 7 Series was adopting the same sized grille as the X7. But now that the two models are out we can check if that's true. BMW Blog may have been the first publication to capture both in one place.

The two models seen at in event in Portugal are the X7 M50d SUV  and the 745Le sedan. So one is an M Performance model with a specific sports body kit and the other is a plug-in hybrid in the roomier long-wheelbase specification. Not surprisingly, the 7 Series is more subtle, but not by much.

If you look closely enough, you may notice that the grille of the sedan is slightly fuller. Of course, in either case, you have active shutters closing at speed to ensure the aerodynamic efficiency of both models. Also, it makes sense for BMW to install such large apertures on something like the X7, which is a gigantic luxury SUV.

If you don't like either of these designs, at least you can take comfort from the fact that other BMW models are going down the same rabbit hole. But we wouldn't be surprised to see the 5 Series testing with something like this for its LCI. 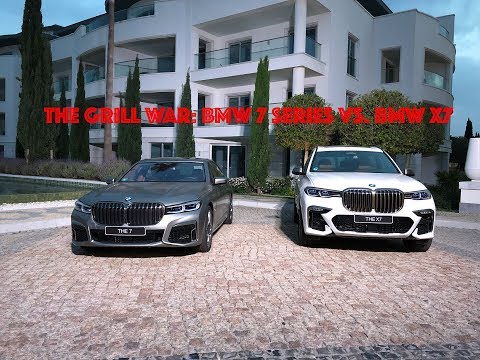