Think the BMW M5 is fast? Just wait until BMW unveils the M8. It's one of two M cars that are going to completely reshape the performance car market this year, along with the X5 M.
3 photos

Testing is still going on at the Nurburgring, where the M8 is pushing harder than ever, so hard that at some points it goes on the dirt. This is no lightweight sports car. The nameplate that began as a sort of high-speed cruiser/911 alternative has every technology, from AWD to adaptive anti-roll bars. So it's going to tip the scales at about 2 tons, similar to something like a base Audi Q7.

We have high expectations for this Coupe, more so than the Gran Coupe version, as the bar was set pretty high by the M850i. It's the M Performance model we never knew we wanted, but BMW did leave a little bit on the shelf, not outright performance, but excitement. With the 50i, there's none of that sense that it's out of control like you get driving an M3.

The Nurburgring testing prototype looks about the same as it did when BMW officially unveiled at an endurance race last year. It's more aggressive than the M850i, with a modified body kit and sitting slightly lower. From the back, you can notice the quad exhaust and a large diffuser.

By now, you guys probably know everything about the M8, including that it comes with a 4.4-liter bi-turbo V8 and AWD. The expected power is somewhere between 625 and 650 HP, which is a significant increase over every version of the M6. Hopefully, all that carbon fiber they're using will offset the added mechanical and technological complexity.

BMW hasn't made any announcements with the launch date, and it's probably focused on the 1 Series and X5 M launches. However, given the history of the M8, we think it's going to debut either at the 24h of Le Mans in June or a Concours event like Pebble Beach. 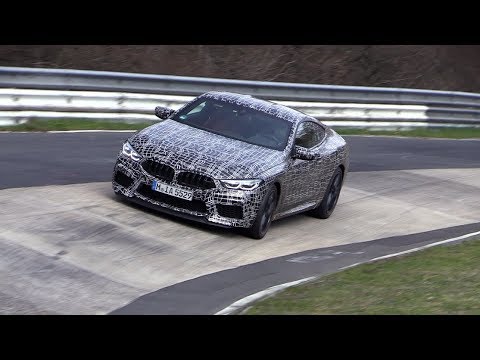