3 Spyshots: 2015 Audi S7 Facelift Has a New Grille and Headlights

Mihnea Radu
Say what they will about German design, but we think they're good at moving things one step at a time. The same year we got the new Porsche 911, Audi adapts the S7 four-door coupe.
6 photos

Obviously, the two have very little in common. If you look deep enough, you might discover how both have been adapted to meet the latest emissions regulations. But we also thought this Glacier White finish looks a lot like Porsche's Chalk, and the two share a fetish for black trim.

The belt-driven starter/alternator and lithium-ion battery allow for stop/start operation from as low as 22 km/h. Coasting for up to 40 seconds is another highlight, and Audi claims the sedan is capable of 6.5 liters per 100 kilometers.

Frankly, the stop/start would be super-annoying if it stopped as you were coming up to a junction. But the €82,750 S7 Sportback has a lot of computers and sensors, it should know where it is. The coupe body is designed to attract attention, it's still very practical. The S7 has a hatch at the rear. The trunk capacity is a tiny bit smaller, but loading bikes or even 2-meter-long flatpack furniture shouldn't be a problem.

If our ranting and short description weren't enough, you can get a whole lot more information from the two videos below. It may be a diesel, but this is a four-door coupe that BMW and Mercedes can't overlook. 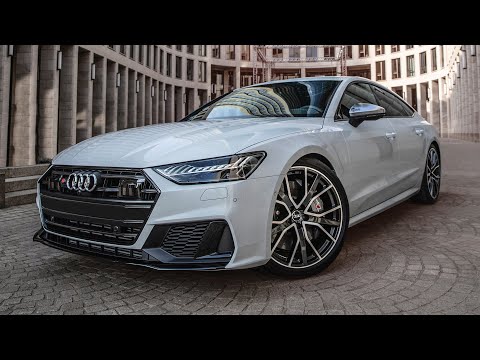