5 2019 Audi A1 Shows LED Headlights in Detail in Latest Spyshots
Car video reviews:
Up Next

2020 Audi RS7 and SQ8 Spied Driving in Snow Near Ingolstadt

Thanks to a recent leak, we now know what cars Audi wants to show this year, and they include the mighty RS6 and RS7. However, the S models weren't on the list, even though they've been testing for much longer.
11 photos

We wouldn't be surprised if the SQ8 was given top development priority. After all, people can't seem to get enough of the normal model, and that only comes with a 286 HP diesel engine in Europe.

What are they going to use for the SQ8? Well, the ones we've seen had TDI badges, which point to the 4.0-liter multi-turbo setup that's already fitted to the SQ7, as well as the Bentley Bentayga sister model. It's pretty much the only diesel engine of its kind and delivers a mountain of torque, so much so that the quattro SUV recently took down a Range Rover Sport SVR.

The rest of the technology package is pretty important too - clever air suspension, diffs, and all-wheel steering. In any case, a TFSI engine would make a lot more sense in America, either a V6 like they'll fit on the S7 or a de-tuned V8 as we saw in the new Panamera GTS. One can only hope!

The RS7 is also in this video. Being a member of the Audi "race sport" family, it's got beefier fenders and that trademark exhaust. Power will come from a new 4-liter hot-twin-turbo V8, which should deliver around 600 HP. That should be more than enough to take on the Mercedes-AMG CLS 53 and maybe even play with the GT 63.

Rumors talked about the RS7 performance being replaced with a heavy but super-fast RS7 e-tron, borrowing tech from the Panamera Turbo S E-Hybrid. But the model in the video clearly isn't plugged in, even though it probably has a smidge of hybrid fuel-saving technology. 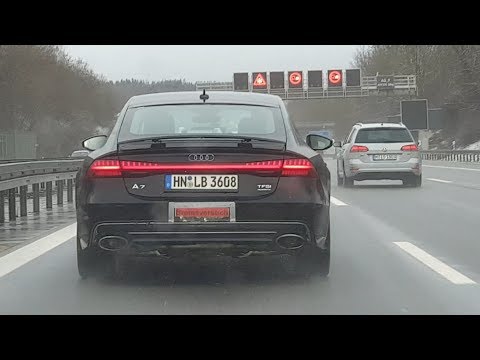