5 2018 Honda Accord Comes Out on Top in Comparison With 2018 Camry
Car video reviews:
Up Next

2019 VW Polo vs. Ford Fiesta: Which Is the Best Small Hatchback?

SUVs are taking over as a whole, but small hatchbacks are still the most popular individual models on the European market. The VW Polo and Ford Fiesta had been competing for the segment crown since their conception many decades ago, and with brand new generations of both coming out, it's time to re-examine this the rivals.
3 photos

Carwow put together this video because comparison tests are so much more popular than individual reviews. However, the outcome is not what we'd call definitive, as there are a couple of other supermini top contenders to consider. Our champion would be the Renault Clio. It's old and has many flaws, but it's very spacious and well designed.

However, the competition between Ford and VW is so much more appealing. And we kind of feel bad for the Blue Oval in this situation because it champion doesn't have the same resources. The new Fiesta is derived from the old one's platform, which is why it has a smaller trunk and less elbowroom in the back. Without these issues, it probably would have won the comparison.

That's right, Volkswagen once again wins a comparison review with one of its "boring" cars, as all the fine folks who hate the brand always point out. But you want your cheap hatchback to do the basic well: shopping, carrying passengers and being refined on the road.

Ford's new Fiesta continues to rely on a slightly spicier pallet, comprising of sweet handling and sporty styling. The good news is that plenty of people are looking for that in a small car. Not the one in the video, though. It's the overpriced Vignale, which makes no sense when compared to the popular and still well equipped Titanium.

The reviewer also points out, correctly we might add, that the 1-liter turbo engine in the Fiesta sound better. However, this unit has had some worrying reliability issues in the past, not that VW's 3-cylinder setups are bulletproof. 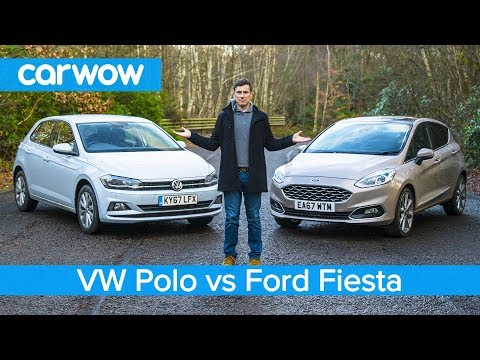