4 Watch the Mazda3 Hatchback Race Dogs for Fun in Britain

Practical, practical, practical - that's what a compact European hatchback is supposed to be. But which should you buy in late 2019 between the ancient VW Golf, and the newer Toyota Corolla or Ford Focus?
3 photos

Design-wise, you can tell from a mile away which of the cars is more stylish. There's a Golf that looks like that on every street, but both Ford and Toyota have stepped up their game in the design department. We love the look of the Focus because it promises sportiness, but the front is too big compared to the rest. Meanwhile, the Corolla is cooler than the Auris it replaces, but some might call it fussy. Let us know which is your favorite.

It's quite a different story inside, where the aging VW still has the best infotainment system in the class, with crisp graphics, quick response times and a matching digital dash (optional). The console might not be all futuristic, but materials are good and ergonomics are top-notch. The new Focus, on the other hand, has a few cheap spots and issues, but compensates with the best driving position.

Finally, the new Corolla is miles better than the old car, but Toyota's infotainment isn't worthy of praise, described here as the Rubik's cube of screens. It's also got the least amount of space in the back. However, confusingly, What Car? praise it for trunk space. Even though the Golf has 100 liters more space, they say the Corolla is better accommodating luggage, even though we can clearly see the top shelf was removed in the Toyota but not the VW.

Overall, we think the buying decision should be base on what you want from the hatchback. The Corolla is an amazing hybrid for people with a light right foot, but it's not fun. The Golf does many things very well easy to understand. Meanwhile, the Focus is the most fun, not just here, but in the class as a whole. 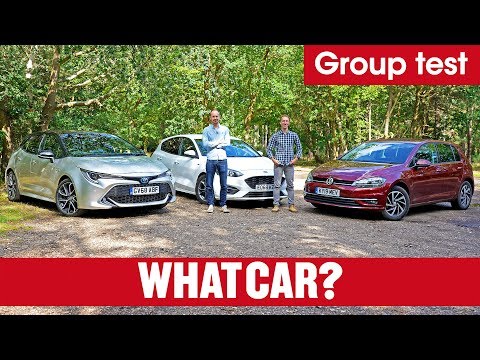