Mihnea Radu
Demand for the Suzuki Jimny has gone through the roof. It's super-cool, small, affordable and unique, but at the end of the day, this mountain goat of a car is still not great for taking corners.
1 photo
The moose test was always going to expose the shortcomings of this car. The new Jimny looks a lot more modern than its predecessors, but it's still built the same way, sort of like a body-on-frame truck, but tiny.

So just how bad is the situation? Well, the moose test carried out by km77 shows the Suzuki is quite unstable. Electronic stability control is working hard to keep the car from rolling over, but it lifts wheels off the ground wobbles like it's about to disintegrate.

The testers say they had two significant problems with the Jimny. Firstly, the steering rack was very long, and the driver just couldn't make fast-enough inputs for the moose test. We'll remind you that the scenario is designed to replicate you having to avoid hitting something which suddenly appeared in your lane.

Also, the grip from the tires is shallow, made worse by the soft suspension and body lean. This results in a noticeable tendency to understeer, even at low speed. At most, they managed to do the test at 68 km/h, which is slow. For the record, the Audi Q8 did it at 79 km/h. Also, we noticed that stability control had dragged almost all of the speed away from the car by the time the test was done.

The Jimny doesn't do any better in the slalom test, which is to be expected. We can already hear the Suzuki haters and SUV critics sharpening their axes. But we still love the little toy. The moose test result is expected, and anybody who's driving this thing fast has a death wish. 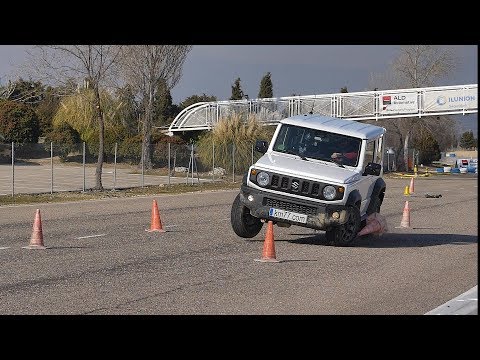