1 2019 Suzuki Jimny vs. Land Cruiser Off-Road Test Is a Nail-Biter

2019 Suzuki Jimny Manual vs. Automatic Acceleration: Which Is Slower?

Mihnea Radu
Forget about the Toyota Supra and how fast it supposedly goes. Life is a constant rush, so you need a car that's slow, looks cool and lets you take in the sights. We can't think of anything better than the Suzuki Jimny.
1 photo
This little 4x4 is still forbidden fruit for U.S. consumption, even though many hipsters would love to put a yellow mini G-Class in their driveway right now. The reason? Well, it's under-engined.

There's a multitude of setups from Suzuki. Europe has a tiny 3-cylinder turbo while Japan has an even tinier 660cc unit. But this short Australian review just focuses on the 1.5-liter naturally aspirated four-banger.

With 101-hp (102 PS) and 96 lb-ft of torque (130 Nm), this competes with some of the slowest imports offered in America the past few years, like the smart car or the Nissan Versa Note. But rather than reading you a bunch of numbers from a company website, we're going to instead focus on the acceleration tests carried out by PerformanceDrive.

One uses the 5-speed manual and the other a 4-speed automatic. Wow, four speeds. many luxury SUVs have over four times the number of gears and are only adding more. Meanwhile, the Jimny has had this configuration since forever. It's moments like this that we want to thank ZF for coming up with that 8-speed.

As you'd expect, the manual is really slow and the automatic even slower still. The shocking numbers are at the end of the video. The Jimny is capable in other regards. Unlike the crossovers we mistakenly call SUVs, it features permanent AWD and a couple of live axles. Ever wondered how many of these you'd need to win a tug of war against the G-Class? Yeah, check this out. 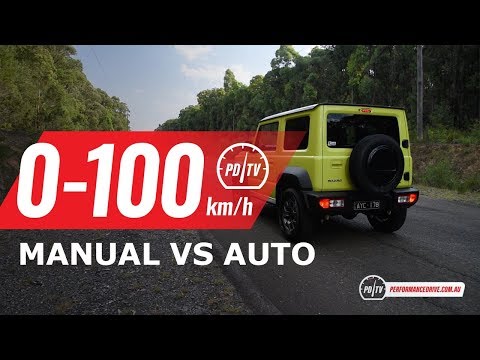