Just as we expected, the Mercedes-Benz GLE-Class is going to debut at roughly the same time as the BMW X5. Here's a video showing almost no camouflage on a pre-production version in Germany.
3 photos

While the GLE is assembled in Alabama, most of the testing was carried out in Germany, Spain, and Northern Sweden. We've been watching the W167 generation for what feels like two years now. But it looks 100% ready.

In fact, based on what we've seen during the C-Class Coupe and SLC-Class launches, this spy video is showing some of the models that will be offered for review.

Only a few powertrains will be announced at first, such as a six-cylinder gasoline motor for the American market and two inline-6 turbodiesels in Europe. After that, Mercedes-AMG will roll out the GLE 53 and GLE 63.

The 2019 GLE is only the second SUV to wear this name. However, Mercedes has occupied this segment for a really long time. To put things into perspective, the M-Class that was being chased by dinosaurs in Jurassic Park was a 1997 ML 320.

The design has changed a lot since those days, as has construction technology. Even though it's not going to be lighter than two tons, the GLE-Class is bigger yet a couple of hundred kilos less cumbersome than the classic ML. Also, the panel gaps are nice and tight on this prototype.

Seeing it straight from the back, we're immediately drawn to the roof rails, which are coming closer together towards the end of the car, like on most wagons. This narrowing body reminds us of hypermiling vehicles, such as the VW XL1 and first-gen Honda Insight.

The taillights are narrow, connected by a chrome strip in the middle, just like on an E-Class. As for the front, well you're just going to have to check out our previous posts to see it. 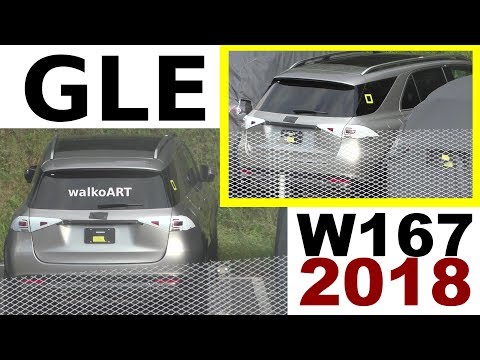