1 Have Yourself a Mercedes-Benz Christmas - Gift Ideas from Stuttgart

Vlad Mitrache
BMW may have the bragging rights on the invention of the coupe-SUV segment, but when it comes to four-door coupes, it was Mercedes-Benz's original CLS that resurrected this unlikely description back in 2004.
13 photos

Its exterior design made the CLS an instant classic, but the second generation - the one you can go out and buy right now - failed to live up to the expectations. It wasn't a bad looking car, it just did not feel as special as the first one. But that's usually the fate of a sequel, right?

Now, Mercedes-Benz is working on its replacement, and given the uniformization trend that sweeps through the brand's lineup, things don't look too promising for the luxury four-door coupe. It appears to be too early in the testing phase to actually be able to make out much about the car's lines, but it will definitely keep those swooping lines when it comes to the roof.

The front and rear have deceiving bulges under the camo that hide the actual shape, but judging by the new headlight design, we expect the CLE (the name is one of the things that look set to change) to sport an aggressive look - similar to the current model, if you think about it, and completely different to the somewhat goofy first generation.

That means the AMG conversion which is sure to follow the regular model's launch will be a very natural process, with the usual exterior modifications fitting well with the car's general attire. Expect it to get the same engine as the E63, meaning it will extract over 600 hp from the twin-turbo 4.0-liter V8.

Speaking of engines, the rest of the range will make good use of the soon to be introduced modular lineup, particularly the inline six units. Whether the CLS/CLE will also get a hybrid version remains to be seen, but given Mercedes-Benz's current push into electric territory, it shouldn't surprise anyone.

The video, short as it is, does show the trunk opening on the CLE won't give anybody reasons to wish for a liftgate as it seems to provide easy access to what will undoubtedly be a large coffer - the rear overhang is proof of that.

With a price sitting between the E-Class and the S-Class, the CLS has traditionally been aimed at those people who seek more exclusivity than the mid-sized sedan can offer, but don't want a car that feels like it should come with a chauffeur either. Like the BMW X6 or the GLE Coupe, this car is a statement: it says "I care more about design than practicality." It can also say you wear a scarf in the summer, but no car is perfect. 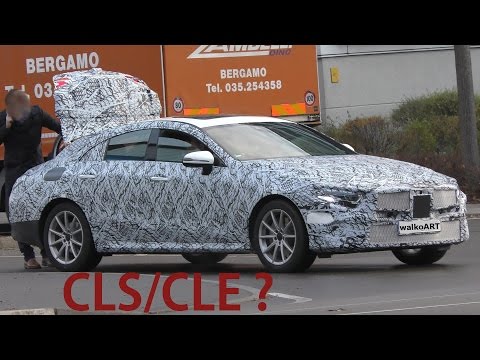