5 UPDATE: BMW Stock Fell 9.3 Percent after Rumors of a Failed Diesel Engine Test Surfaced
Up Next

The People vs. Elon Musk: Tesla CEO Charged with Fraud by SEC

Home > News > Car Profile
Mihnea Radu
BMW prepared a whole fleet of powertrains for the media launch of this all-new X5. We think the M50d is the most interesting, partly because it's not offered in the States, because it has as many turbos as wheels.
3 photos

The M50d made its debut during the last generation of the X5. The tri-turbo 3-liter proved quite popular with those looking for the fastest diesel SUVs around. Of course, rival companies have come up with better solutions, but BMW still has a 3-liter.

For 2019, the M50d has one extra turbo for a total of four. One exciting highlight we found this presentation video is the active sound system, essentially the same thing Audi uses on its SQ7. It covers up the diesel rattle that would detract from the character of a $100,000 vehicle. Inside, the "speaker sound" is reminiscent of that in the i8.

Responsible for the performance of the new X5 is the B57 engine, the most powerful six-cylinder diesel in the world. With 400 HP and 760 Nm, it's got a higher power density than many sports cars. However, Bentley Bentayga's 4-liter just has more of everything.

Performance-wise, the M50d gets to 100 km/h in 5.2 seconds and is limited to the usual top speed. Until the X7 arrives, this is also the most massive car BMW makes at up to 2,350kg with options.

The M-specific body details make the X5 stand out more, but you can have most of them through the M Sport package, so you don't have to get this engine. Many have said the rear design isn't good, but the consensus around the office is that BMW did a great job.

This test car has been sprinkled with lots of options, including those new laser headlights and crystal inserts on the shifter and iDrive controller. The digital dashboard is also much better than. 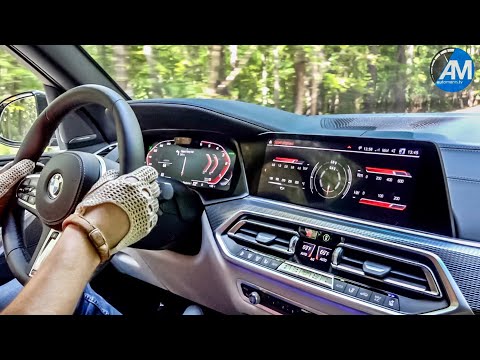