It feels like only a short time ago, BMW introduced the X4. But in that time, Mercedes also introduced a sexy contender, the GLC Coupe. Which is why the Bavarians have retaliated with an all-new generation of X4.
23 photos

In most regards, this brand new X4 feels very familiar. It falls short in some areas while being a strong contender in other. Carbuyer's UK market review puts the M Sport xDrive20d model to the test.

One of the highlights of the video is that Ginny Buckley believes the X4 has much sharper handling than the Mercedes rival. While it doesn't have a clear edge over the F-Pace or Stelvio, those all lack the rakish roof.

With BMW having such a wide variety of engines, it's essential to get advice on which is the best. This review says the xDrive20d is the most frugal, but also rougher than its six-cylinder counterparts. The flagship M40d and M40i will provide superior acceleration, but we think the xDrive30d is the sweet spot. No matter which one you go for, a smooth-shifting 8-speed takes care of the gears.

The UK model range is quite impressive because you do get a lot of kit as standard. The base X4 Sport gets 3-zone climate, sat-nav, adaptive LED headlights, parking sensors, leather seats an automatic hatch, 18-inch alloys and lowered suspension. What else could you want? Try the M Sport, which offers the body kit you see in the video, as well as a digital dash and a larger infotainment touchscreen.

The size of the trunk isn't too bad, with the only major downside over the X3 being the lack of rear visibility. Of course, there's also the styling, which not everybody is going to be a fan of. We think the X4 looks better from the back than every SUV this size, but its chunky front end doesn't match. 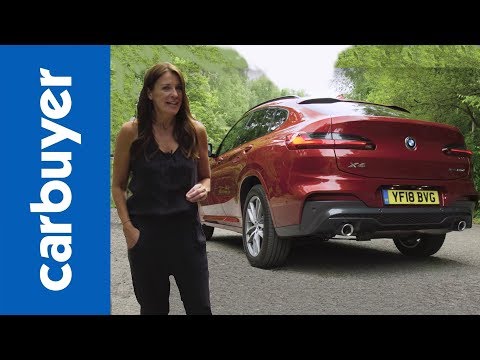