4 BMW Z4 Plays With M2 Around the Nurburgring

The outgoing 3 Series had an unofficial M Performance model since you could add a lot of cool parts to the powerful 340i. But this time, they are going all the way with the M340i, which will go off like a firecracker.
2 photos

Why buy an M340i when you can have the M3? Price, for starters. Also, you can't get all-wheel-drive in the real M car, at least not right now, but you can in most M Performance models.

This latest Nurburgring spy video shows the M340i being put through its paces. The sedan sounds great, and it's plenty of curb appeal too. Designers have changed the look of the bumpers to give it a more aggressive stance. Coupled with big wheels and some rectangular exhaust tips, this is one of the sportiest 4-doors BWM will make.

Speaking of the exhaust, we think a 330i is interlaced within the spy footage. If you don't want to listen out for the telltale sound of a 4-cylinder engine, you can always look for the exhaust setup with two regular round tips.

We tried to make screenshots from the same angles to show you that the M Sport and M Performance bodies are going to be almost the same. Only the side intakes in the bumper set them apart. We're not displacement snobs, so we'll admit that the 2.0-liter is more than enough in a sedan this size.

Regarding the output, the M340i should have 360 horsepower and 500 Nm of torque. An 8-speed auto will come standard, but the xDrive will be an extra. We expect BMW to report an 0 to 100 kph (62 mph) time of under 4.5 seconds. The 330i, meanwhile should take about 6 seconds to do the standard sprint while motivated by its 252 horsepower 2.0-liter turbo engine.

Based on the new CLAR architecture, the new 3 Series is going to be a little bit longer than before, but also slightly lighter. All the technology from the 5er should trickle down as well. 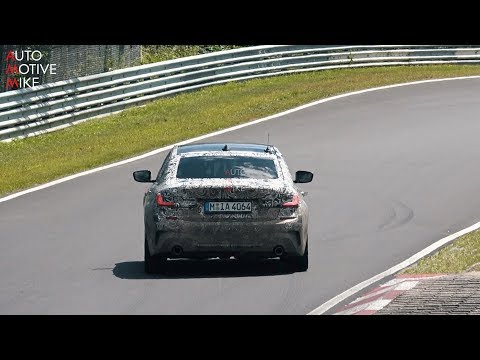