3 2020 Audi RS6 Spied at the Nurburgring, Sounds Angry About the S6 Getting V6

Home > News > Car Profile
Mihnea Radu
The Germans don't have quite the same dominant grip they used to over the SUV market, but there's still a small niche where they are uncontested. If you're looking for speed, luxury, and economy in an average-sized model, you're probably looking 3-liter diesel versions of the Audi Q5, BMW X3 or Mercedes GLC.
3 photos

PDriveTV organized a small test between the Audi Q5 50 TDI and the BMW X3 xDrive30d, two direct rivals in terms of power. If you like European cars but are worried that emissions restrictions are going to ruin your fun, consider moving to Australia. We can think of few other places where German cars with big diesel engines are still booming.

The X3 xDrive is something that needs no introduction. This least powerful inline-six configuration offers a good blend of power and economy, not to mention it's probably going to be more reliable than the multi-turbo setups. The G01 generation gives you 265 HP and 620 Nm of torque, sent through the familiar 8-speed auto to the AWD system for a 0 to 100 km/h time of 5.8 seconds.

"50 TDI" is a new name given to the Q5 with the 286 HP, 620 Nm version of the 3.0 TDI. This too uses an 8-speed gearbox. Though the video narrator claims a weight gap of over 300 kilograms separates the two, our data shows it's closer to 50 kg in favor of the BMW. Using the same Vbox on the same road, the reviewers were able to show that the BMW is actually a little faster.

To 100 km/h, it manages 5.5 seconds, while the Q5 takes 6.3 seconds A similar gap is seen over the quarter-mile test, where the Audi was slower by about 0.6s. Braking and fuel economy are pretty much identical, though.

These numbers are unlikely to change your buying decision radically. Almost every premium car fan knows BMWs are usually a little faster than their Audi counterparts. But the way the interior is styled or how much truck space there is might be very important when buying an SUV. Thankfully, PDrive goes over this as well. We're not going to discuss this any further, as BMW vs. Audi topics can send readers reaching for their pitchforks. 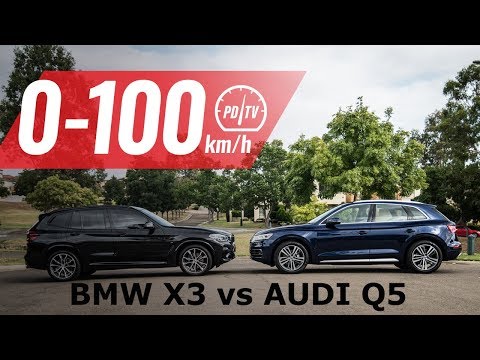