1 2019 Suzuki Jimny Manual vs. Automatic Acceleration: Which Is Slower?

Dieselgate was supposed to kill the TDI, but it seems stronger than ever. And so, the eternal battle with the other two German automakers continues. Today, we're going to look at the A6 50 TDI and the 530d.
1 photo
Everybody criticized Audi for the new naming system, but it's actually worked quite well in helping us identifying different powerplants. 50 TDI means a 3-liter TDI with 286 horsepower and 620 Nm of torque, the same as for the Q7 or Q8.

Meanwhile, the 530d has the same amount of torque and number of cylinders, though they are arranged in a straight line. It's also down 21 HP, though that shouldn't be a big deal.

I bet you guys think the Bimmer has some kind of secret weapon that gives it an edge. We checked, and it actually has a couple. First, it's lighter by about 180 kilograms, which is a lot. Besides that, its platform is RWD, which should offer a small traction advantage.

But the Audi is cheating. Based on the acceleration numbers on the screen, 5.5 and 5.7 seconds respectively, we're dealing with the 530d sDrive versus a quattro. More powered wheels mean you have a greater chance of using all that torque, which is about for times more than a Ford Fiesta EcoBoost.

So we know what the numbers say, but does that match up with whats' in the acceleration test? Actually, no. The BMW is keeping up to 100 km/h and stretches a tiny lead after that. By the time they're maxed out, the 530d is 5 km/h faster if that makes sense.

We wouldn't be doing our jobs if we didn't take money into consideration here. In that regard, they are evenly matched. The A6 50 TDI with standard quattro will set you back €58.700 in Germany while the 530d is €900 cheaper normally or €1,700 more expensive when xDrive has been added. 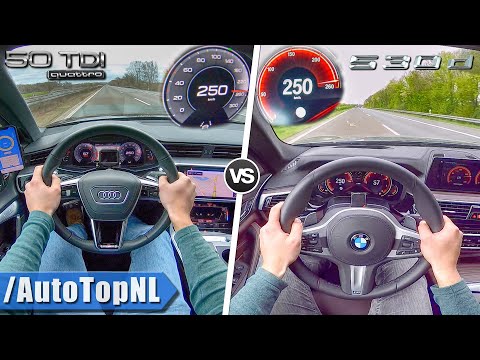