3 What Name Would You Give To The Upcoming SEAT Mid-Size SUV?

5 SEAT Won’t Offer Cupra, Three-Door, Wagon Versions Of The 2017 Ibiza
Up Next

Vlad Mitrache
Did they open up car renting agencies with SEAT's unreleased Ateca Cupras near the Nurburgring, because that would explain why this man with a white helmet drove it like that?
1 photo
Or maybe the 300 horsepower the performance SUV is expected to have could provide the answer. SEAT cars always pretended to be sportier than they really were, but with the Ateca Cupra (and the rest of the Cupra models), they finally have the brawn to match the looks.

The Cupra version of SEAT's first ever SUV brings relatively minor changes to its standard iteration, with most of the visible ones concentrating at the front and the back of the vehicle. It gets a new front bumper with larger air intakes (they've essentially removed the fog lamps), and a quad exhaust at the back which successfully makes the vehicle's rear symmetrical.

There's no telling whether SEAT will keep this mostly subdued appearance of its performance SUV or is keeping it a secret for a while longer, but if this is it, some people might find it a bit disappointing.

Especially since the car obviously has no problems going fast. In fact, given the tall seating position and high profile of the vehicle, we suspect a lot of its drivers will reach their comfort limits first before exploring everything the Ateca Cupra has to offer.

The video shows very stiff suspensions which, despite the relatively high ground clearance, keep body roll to a minimum and ensure there's always plenty of contact with the asphalt. That means ride comfort will have to be somewhat sacrificed, but we've come to expect that from go-fast vehicles, even if they're based on SUVs.

SEAT's sporty SUV will use a two-liter four-cylinder engine coupled with a seven-speed double clutch transmission and an all-wheel-drive system. Performance figures quote a 0-100 km/h (0-62 mph) time of five seconds, which is nothing short of fantastic for a car this size. It's actually quicker than the recently released Honda Civic Type-R.

The Spanish brand of Volkswagen AG is attempting a resurgence after dipping in popularity over the past years, and it seems well aware there's nothing better than a high-speed vehicle to take care of that. SEAT went even one step further and mixed in one of the most lucrative segments, that of the compact-sized SUVs. If that's not a recipe for success, then we don't know what is.

The 2018 SEAT Ateca Cupra should have its official launch later this year, and since the Frankfurt Motor Show is the only major European event left, that's a possibility. However, with a starting price of €40,000, the only thing standing in the way of Ateca Cupra's success is SEAT's brand image - because you can't find anything with remotely similar performance in that price range that's also an SUV. 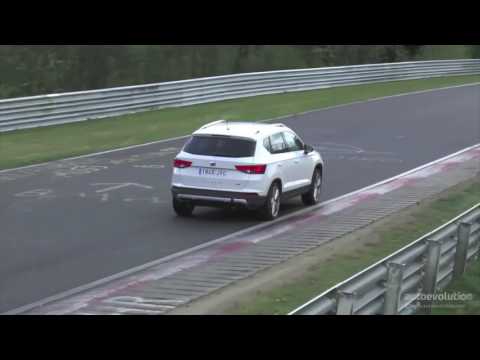