5 2018 Mercedes-Benz X-Class in German Traffic, Pickup Truck Could Come to U.S.
Car video reviews:
Up Next

Pickup trucks have notoriously bad safety ratings, which might seem weird for vehicles of their size. However, considering they are mainly built for work and with keeping the cost down constantly on the developer's mind, some corners are bound to be cut.
1 photo
On the other hand it's worth remembering that safety ratings are relative to others in the same segment. In other words, if a three-star pickup truck crashes into a five-star smart fortwo, don't expect the former to suffer the brunt of the impact. After all, the laws of physics don't care about a car's stars but its size and weight.

With that out of the way, let's get back to pickup trucks and how lousy their safety ratings are. Well, they're not all that bad, but as far as the EuroNCAP is concerned, three stars aren't uncommon, while getting four stars makes that vehicle a segment leader.

The only one to earn top ratings is the Toyota Hilux, but only when equipped with the optional Safety Pack. Without it, the Japanese commercial vehicle gets a measly three-star evaluation. And in case you're wondering what the Safety Pack contains, it's mostly things that will prevent you from crashing, not make it safer once you do.

Now, though, the 2018 Mercedes-Benz X-Class has been assessed by the European car safety expert, and it came out with flying colors. No, really, it scored 90% in adult protection, which is more than decent, and it even received an 80% mark for pedestrian protection. Needless to say, the overall rating was five stars, which is great.

It's also one star over the result of the Nissan NP300 Navara, the pickup truck the Merc is based on. To make matters even more baffling, the Japanese pickup was tested in 2015, back when EuroNCAP procedures were a bit laxer than they are now. Is this magic, or just very good engineering on Mercedes' part?

Actually, it's just indicator of just how crucial active safety systems have become to the safety score of a new vehicle. The X-Class comes equipped as standard with pretty much all the features included in Toyota Hilux's safety pack, things like autonomous emergency braking or a lane assistance system, features that didn't show up in Navara's base specs.

Whatever the case, this difference will play well for Mercedes who had some trouble explaining why people should pay extra for a "luxury" pickup when they can have one that's just as good for less money from Nissan. 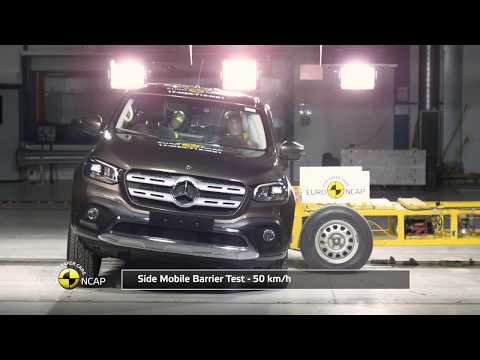