4 2018 Mercedes G-Class Shows Up in Sweden, Second Generation Plays in the Snow

Alex Oagana
Launched in 1979 for civilian use but based on a slightly older army vehicle, the G-Class has since become one of the true cult vehicles in the Mercedes-Benz lineup.
5 photos

Despite constant revamping and upgrading of the model over the years, the 38-year old platform had started to show its age, so the three-pointed star is currently working on an all-new generation.

That being said, you'll be forgiven for thinking this prototype looks like a current model with some black and white camouflage added to it because it is. Look closer, though, and the extra width of the car will become apparent.

According to insiders, only about 8 percent of the old G-Wagen will be kept, and we suspect that the windows and taillights are part of that small percentage. Everything else is all-new, including the slightly more accommodating interior and the engine and transmission lineup.

Speaking of which, judging by the sound of the exhaust, the pre-production prototype spied in the video below is most likely the G500/G550 replacement. Powered by a detuned version of the AMG-developed 4.0-liter V8, the model should be a lot more fuel-efficient than its predecessor mostly thanks to two reasons.

First of all, the car itself will be much lighter, with rumors suggesting that about 400 kg (881 pounds) could be shed on some versions. Second of all, the G-Class will switch to the much more efficient 9G-Tronic automatic transmission, which also features a coasting function.

Expect all the latest safety equipment that can be fitted to the E-Class W213 to find its way on the G-Wagen as well, in the detriment of some hardcore off-roading options, such as the three locking differentials or a rigid front axle. A pneumatic suspension could also arrive as an option on some versions or as standard on others.

Either way, the biggest changes will be found inside, where a brand new center console will bring the latest Comand version and a lot more creature comforts. In other words, it will still be an off-roader, but it will have a lot more SUV-like amenities. Expect the production version to be unveiled toward the end of 2017, with sales commencing in early 2018. Production will take place in Graz, Austria, just like its predecessor. 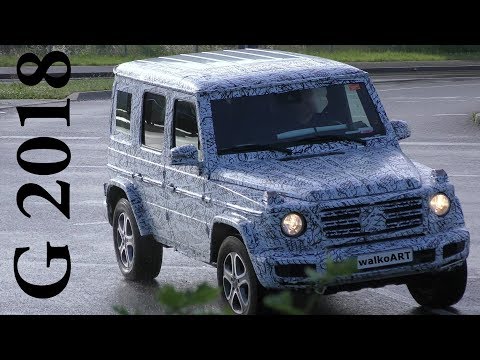