Sometimes you have to stop and wonder if this ambition shown by the automakers to offer a complete set of body styles isn’t just a big waste of money. Developing a new car takes a lot of resources, and selling a few thousand coupés each year isn’t going to make up for them.
1 photo
Yes, the coupé will always be the halo version of its respective model, the one everybody talks about, but it’s also the one almost nobody buys. And there’s no way of knowing exactly how many new sales it generated, so it could be mostly categorized as an ambition.

On the other hand, some manufacturers have to keep the coupé flag flying high, so then why shouldn’t Mercedes-Benz be one of them? Especially since it has showed it’s found its groove with the latest two examples: the S-Class Coupé and the C-Class Coupé.

The car in this clip is the exact same one that was spotted a few days ago by our spy photographers, and by that we mean that it’s wearing just as much camouflage as before. Nothing new to report on the exterior design front, then. With the current camo, the front looks like a Klingon while the rear resembles that BMW 6 Series butt from the Chris Bangle era. Frankly, we don’t know which of the two we find scarier.

The new E-Class Coupé will use the same modular platform as the sedan, so it won’t be plagued with the same problems as the current generation, which used a modified C-Class platform that couldn’t hide the fact that it was basically a whole segment smaller.

In tone with Mercedes-Benz’s new found elegance, the 2018 Mercedes-Benz E-Class Coupé will come with a clean profile, with no B-pillar to interrupt the flowing greenhouse. It will also get the full range of the newly developed inline six-cylinder engines, as well as a Mercedes-AMG version. And that reason alone justifies the effort put into making a coupé version for the new E-Class. Just our completely subjective two pennies. 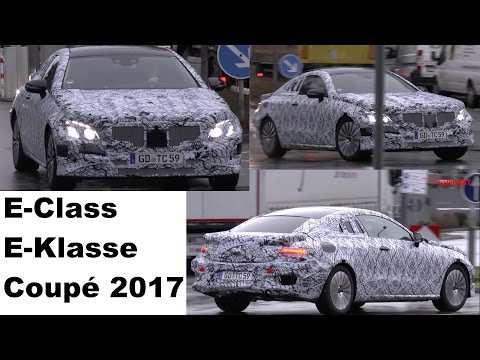