Vlad Mitrache
The Mark IV Land Rover Discovery wasn't a bad car to drive, but its tall figure coupled with the colossal weight meant that cornering was definitely not its strongest suit. It did OK, but it didn't excel.
6 photos

There were 2,570 reasons for that (or 5,666 if we're talking pounds). The current Land Rover Discovery is one of the last SUVs to be built using the body on chassis principle, something most manufacturers now consider to be outdated mostly because it involves a heavy steel chassis.

And still, expect a lot of the more traditional Discovery owners to dislike the new model exactly for this reason. They like its old-schoolness, and with the Defender gone - at least for now - they're left with nowhere to go in their search for a tough off-roader. And then there's also the design. Land Rover had to let go of the boxiness that best describes the Discovery and go for something more modern. With the car still under wraps, it's hard to tell whether it went too far or not far enough, but at the moment it looks like those potential clients we talked about earlier are going to need some time to readjust to the way the car looks.

It's definitely more rounded, and while that could help the SUV with its aerodynamics, it won't do much to increase its off-road credentials. The longer overhangs - especially in the front - mean smaller approach angles, and while very few people actually drove their Mark IV Discoveries off-road, it still gave them plenty bragging rights.

The new car should do alright as well since it will use a newer version of its four-wheel-drive and the Terrain Respons systems for maximum grip and control under any condition. But it's on the road where the Discovery impresses the most. Its new platform that makes good use of aluminum significantly lowers the gross weight of the vehicle, giving it much better handling in corners.

Seeing the 2018 Land Rover Discovery dart around the 'Ring like this could be interpreted as a confirmation of recent rumors that claim the company is preparing two different models within the Discovery name, one more inclined toward off-roading, and the other built for asphalt use. Needless to say, if things do turn out this way, I think we all know which of the two versions is going to sell better. Because only a fool or a farmer who lives in the woods would even consider buying the former.

Lately, Land Rover has begun testing all kinds of autonomous driving technology, including a system that should be able to guide the vehicle off-road. However, even with the launch scheduled for 2017, there's still not enough time for this technology - which is still in its early testing phase - to make it onto the production vehicle. That being said, expect the fifth generation Discovery to be a lot more tech-savvy than the outgoing model. Which doesn't say that much since the current Disco has a rather crappy infotainment module.

But the real shocker here is the way this large SUV handles itself on the track. Sure, there is plenty of tire squealing and body roll, but the Disco holds the trajectory with ease, and the suspension system appears to work magic. With what sounds like a powerful gasoline engine under the hood, the new Discovery might actually be a hoot to drive. A tall and pretty heavy hoot, but a hoot nonetheless. 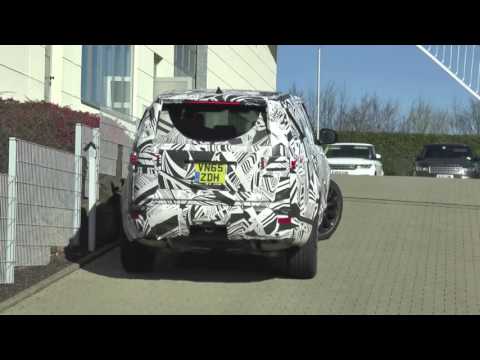