5 Harley-Davidson V-Rod Discontinued For 2018?
Car video reviews:
Up Next

Audi RS4 Avant Gets Matching RS4 Trailer in The Netherlands

Harley-Davidson promised to put out a ton of new models in the following 10 years to attract new clients and keep the business going. And it looks like it started delivering already with new trademark applications revealed a couple of weeks ago and two models revealed this week.
17 photos

The 2018 Forty-Eight Special and Iron 1200 Sportster models might not be built-from-the-ground-up new, but they still look refreshing and seem to fit right in the custom-built trend going on with most bike makers today.

“Since its inception, the Sportster has offered the perfect combination of size, power and character that makes it appealing to so many different riders,” said Brad Richards, Harley-Davidson V.P. of Styling & Design. “A Sportster is a relatively easy bike to strip down and reinvent. What we’ve done to create the new Iron 1200 and Forty-Eight Special is what Sportster owners have been doing with their own bikes for generations.”

Starting with the Forty-Eight Special, the new model distinguishes through a 130 mm front tire held in by a 49 mm fork secured with massive forged aluminum triple clamps all painted in gloss-black paint and topped with a 7.25-inch high Tallboy handlebar

The Evolution 1200 engine comes with a black top end and more chrome pieces, like the primary, inspection and derby covers, exhaust shields, lower rocker boxes, pushrod tubes, and tapped covers. To add a colorful twist, the 2.2-gallon peanut Sportster fuel tank on top can be had in Wicked Red, Billiard White, and Vivid Black along with rows of horizontal stripes framing a simple Harley-Davidson text logo.

Moving on to the original urban brawler, the Iron can now be had in the 1200 flavor, thus offering more torque to play with along with a deeper sound to match the bike’s raw look.

Speaking of looks, the 2018 Harley-Davidson Iron 1200 comes with a Mini Ape handlebar with an 8.75-inch rise and 32-inch spread, along with a gloss black speed screen framing the headlight, and a solo seat that flows into the rear fender’s lines.

As with the Forty-Eight, the 3.3-gallon fuel tank features multi-colored striped graphics on backgrounds that can be had in Vivid Black, Twisted Cherry, and Billiard White. The headlight speed screen comes only in Vivid Black, but I guess you can easily take it off and respray it with whatever you want.

The lower, mechanical, part of the model adopts an all-black theme with very few parts, like the pushrod tubes and tappet covers, finished in shiny chrome.

Last but not least, the Harley-Davidson Smart Security System and anti-lock braking system are factory-installed options for both the new Forty-Eight Special and Iron 1200 models. They are bound to reach dealerships soon, so don’t forget to check them out and try one. 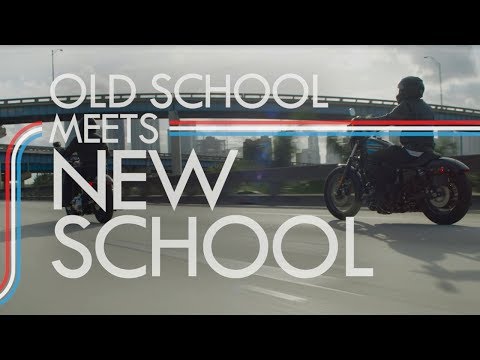