Technically, you shouldn’t be able to defeat a Dodge Challenger SRT Hellcat in a straight-line race with any Camaro, not even the ZL1, let alone the SS variant. Here, however, we’re dealing with an 1/8-mile competition, and the pair went at each other a total of four times with different results.
7 photos

First, the fact that it’s such a short distance and not a typical quarter mile means that getting off to a good start is the absolute most important thing. This explains why this Camaro SS put up such a great fight in two of the four runs. But before we discuss winners and losers, let’s examine each car’s specifications.

The sixth-generation Camaro SS is powered by a 6.2-liter naturally aspirated LT1 V8 engine, same as a C7 Corvette. Power is rated at 455 hp, to go with 455 lb-ft (617 Nm) of torque. Normally, over a quarter mile, this is a 12-second car, at least straight from the factory. Now, if this was a ZL1, then its engine would have been supercharged to the tune of 650 hp and 650 lb-ft (881 Nm) of torque, and that makes for an 11-second car, although again, this isn’t a quarter mile race.

As for the Challenger SRT Hellcat, it was Dodge themselves who posted an official quarter mile time of 10.85 seconds back in 2014, which on paper proves that this is a quicker car than the Camaro.

So then, what exactly happened here? Well, the two cars split those four races evenly between them, and each time the Camaro won, it seemed as though the Dodge driver botched the start. Still, if you pay close attention, you can easily tell just how much extra pulling power the Hellcat has compared to a Camaro SS. 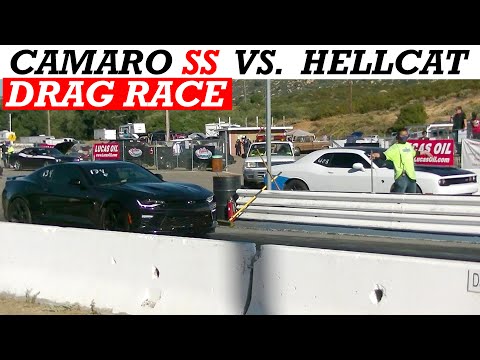