2 BMW i3 with Range Extender Gets Class Action Lawsuit

Vlad Mitrache
The fast mid-sized sedan from BMW is being put through its paces on the colorful track of the Nurburgring Circuit, even though it's got almost a full year until its official debut. But with the new Mercedes-AMG E63 set for an imminent reveal later this year, the Bavarians can't hang about for too long.
1 photo
The current 5 Series was probably one of the most successful BMW models of late, and even today it's hard to find any flaws on that car. It is, perhaps, a little too tight in the back for a sedan its size, but apart from that, it's the conscious driver's dream car. Not to mention it came as a wagon as well, boosting even further its practical aspect.

Now, though, BMW is caught in the middle of a revamping process for almost all of its range. The new X1 was introduced last year, as was the latest 7 Series, and now the X3 seems to be next. The new M5 will likely debut early next year as a 2018 model, and we'll surely see more of it in the meantime. But let's just see what we know about the new Fast Five at the moment.

Well, we'd say plenty. We know the car will use the CLAR (CLuster ARchitecture) platform employed for the larger 7 Series as well, which means a lower weight and all the other gains fewer pounds bring with them. Like most other new BMW models, the M5 will benefit from the CFRP (carbon fiber reinforced plastic - a durable, light, and relatively cheap material) expertise brought by working on the i project.

Power will very likely be provided by the same 4.4-liter V8 engine used on the M5 30 Jahre edition, which means at least 600 hp and 516 lb-ft (700 Nm). To cope with all this, the Munich-based company will endow the new sporty sedan with the xDrive AWD system, as well as a quartet of really large brakes for when the fun risks turning into tears.

The one characteristic that used to set BMWs apart from the competition was their cars' handling, and the new M5 promises to live up to the expectations. It will come with dynamic anti-roll, anti-squat, and anti-dive systems (because rolling, squatting, and diving are bad, M'Kay?). Voices inside the company also say that the new model will get an active aero kit, even though such things are hard to spot on these camouflaged test cars.

As always, there's talk of an M5 Touring, but with the inevitable launch of the Mercedes-AMG E63 T-Modell, these rumors now seem more entitled than ever. Well, we've possibly got until March next year to wonder, but until then there's this video that won't watch itself. 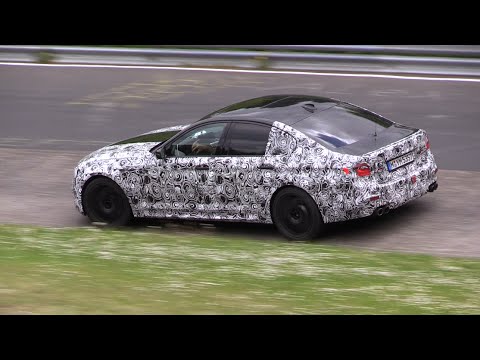