1 SsangYong To Launch All-New Rexton in 2017

3 LOL: Dash Tells You Which Way the Wheels Are Turning on a SsangYong

4 SsangYong Will Bring Two SUVs to Geneva, Tivoli XLV Is One of Them

5 SsangYong XLV Shows Frankfurt how the LWB Tivoli Could, But Won't Look
Car video reviews:
Up Next

2017 Ssangyong Rexton Testing Together with Its Mercedes-Benz Family

Over the last few years, Korea has fought hard for its place at the big car manufacturers' table, and nobody can deny now that it fully deserves it. Its two main brands - Hyundai and Kia - offer very competitive products and the public's perception is in the process of admitting the fact that their cars are worthy of just as much credit as those coming from any other country.
1 photo
Taking advantage of this newly obtained status is a less-known company that's been specializing in building four-by-fours. Going by the not so friendly name of Ssangyong, it is currently busy reinventing itself after launching a series of products that even though offered a lot for the low prices they came with, didn't do enough to convince people to buy them.

The relaunch was initiated by the Tivoli model, a small crossover that came with both two- and four-wheel-drive, which generally speaking was well received. The prices were still very accessible, and the quality wasn't great, but all-in-all it offered a much more modern package. But apart from the Tivoli, the rest of Ssangyong's range is in desperate need of a refresh. Or, rather, a reboot.

That is going to come with the nex generation of its biggest model, the Rexton. The SUV will be launched in the second quarter of 2017 and, according to the company's CEO, will look a lot like the Y400 concept. That means a very tall silhouette with prominent wheel arches and sufficient ground clearance for tackling the off-road bits as well.

This, together with the fact it was testing at a Mercedes-Benz facility, is what made us mistake it for the new GLS in the first place (unforgivable, we know, but we blame it on the camouflage and the scenery behind it). But there's a very good explanation why the Rexton was there: until it gets the new GDI 2.0-liter turbo engine developed by Mahindra&Mahindra, the Rexton is going to use the old 2.1-liter Mercedes-Benz unit. Not only that, but it will also continue to employ the seven-speed 7G-TRONIC automatic transmission, before switching to an eight-speed once the new engine arrives.

The company promises an increase in cabin quality and a different overall look to what we've been used to so far. The new car's chassis is also longer and lighter, which means the 2017 Rexton should also handle itself better on the road. However, after all is said and done, the biggest selling point for the Ssangyong SUV will continue to be its price. It's expected to debut at around 30,000 euros, which would instantly make it the most accessible vehicle in its segment, and by a large margin. The new Rexton should debut at this year's Paris Motor Show, with sales starting in the first half of 2017. 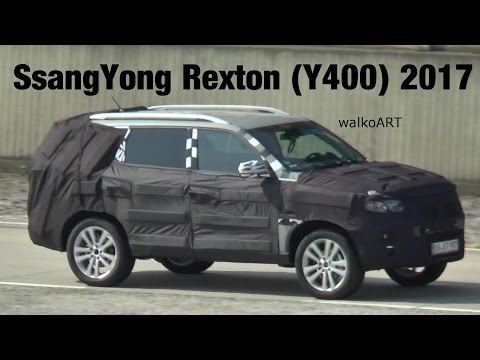