BMW was the first brand to come with this coupé-ish SUV idea, and it was an immediate hit, in spite of some heavy resistance at that moment. Now, though, Mercedes-Benz is quickly catching up.
1 photo
The first response from Stuttgart was the GLE Coupé, a GLE (ex-M-Class) with a hacked-off rear that looks a lot more aggressive and a lot less functional. But it also looks quite taller than the BMW X6 and somewhat bigger overall, so its sporty credentials are a little lost on the way.

From what we’ve seen so far of the GLC Coupé, however, this smaller model that is supposed to go against the BMW X4 and whoever will care to join them in the future, appears to be a lot fitter. It is, after all, based on a completely new car, unlike the GLE Coupé, which is just a new body style for a 2011 vehicle.

The model we see here is the AMG Sport line version with its 3.0-liter bi-turbo V6 engine developing 367 hp and the new 9G-TRONIC nine-speed automatic transmission. Up until now, the only two models to get spotted have been this one, and the new plug-in hybrid that will likely be called GLC350 e.

So, why would Mercedes-Benz insist so much on this intermediate model? Well, for all we know, this could end up being the top-of-the-line GLC version since a full-blown AMG model hasn’t been confirmed yet. It would be a surprising move from AMG and Mercedes-Benz, but after the trick they pulled with the SLC, nothing would surprise us anymore.

But regardless of the company’s decision, the GLC450 AMG could prove to be the best seller of the range by offering the most suitable powering option for a car looking like this without breaking the bank either.

We can get a good glimpse of what to expect from this short clip showing us the car pulling away from a standstill. We can hear the engine note, but even more so, the exhaust with that familiar AMG rumble after each gear shift. And with the new nine-speed auto, there will be a lot of them. We counted five in this clip alone, but we could be wrong. How many do you get? 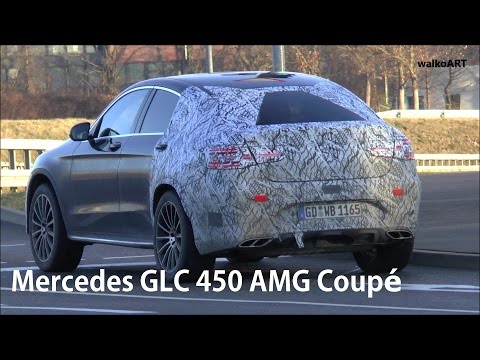