1 If Cruella Deville Asks for Her Car, Tell Her It’s Somewhere in Texas

2 2016 Mercedes-Benz GLE Gets the Video Presentation It Deserves

5 Mercedes-Benz Confirms New GLS and SL Will Be Launched This November - Probably in L.A.
Up Next

Volkswagen's Crown Jewels Are in Danger

Vlad Mitrache
Videos featuring the 2017 Mercedes-Benz E-Class are starting to pile in, which means we’re getting closer and closer to its official reveal that should take place early next year.
1 photo
Mercedes-Benz has two launches scheduled for the end of this year, both happening at the forthcoming Los Angeles Auto Show. We’re talking about two facelifts for two very different models in the brand’s range: the GLS full-size SUV and the SL roadster.

The more we get to see the car, the more we start to get used to the idea that it’s going to be a smaller version of the S-Class. And while the E-Class has had its own personality up until now, it can be argued that there was never a better time to let go of it and embrace that of its larger sibling than now.

The only problem we can see with this approach isn’t related to future E-Class owners, but to those people who have already spent a lot of money on their S-Class models, only for something extremely similar yet considerably cheaper to be launched two years later. Mercedes-Benz is somehow diluting the importance of its flagship, and that can’t be a good thing for the brand on the long run.

Back to the E-Class, the video below shows a parking lot full of W213 wearing all sorts of concealment devices, from the standard psychedelic camouflage applied to the more important areas to full textile covers that hide the whole care completely. However, some of the silver painted cars give us enough to look at. 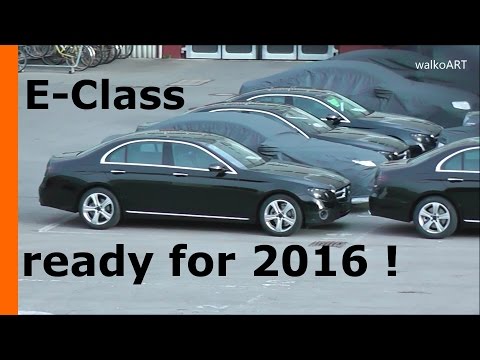