1 COTY 2016: The Nominees Are In - Seven Cars Are Battling Europe's Car of the Year Title

5 2017 Audi S4 Spotted Testing in the Alps, the Camouflage is Completely Gone
Car video reviews:
Up Next

Renault-Nissan to Launch More than 10 Driverless Cars Through 2020

The next generation Audi A4 will make its American debut at the 2016 Detroit Auto Show.
35 photos

While the European market’s version was publicly revealed in June 2015, the German sedan will be available for sale in the United States of America starting this spring. The company has yet to unveil the U.S. version of the new A4, but it will be shown at next week's Detroit event.

At the initial time of launch on the U.S. market, the A4 will be available with a single engine option, a 252 HP and 273 lb-ft 2.0 TFSI turbocharged four-cylinder gasoline engine. The unit is available either in an FWD configuration with a seven-speed S tronic gearbox or with quattro all-wheel-drive and the same type of gearbox.

The MY 2017 Audi A4 received an all-new body, a fresh and sharp design, a significant technology upgrade and improved engines and gearboxes. The body of the new A4 features a specially developed aluminum hybrid construction to be lighter and stiffer than its predecessor.

Audi didn’t settle on changing the exterior and improving the technical platform, but it also dramatically changed the A4’s interior. The car has an acoustic windshield made to reduce cabin noise, better materials, more space and fantastic optional instrument cluster. We’re talking about the 12.3-inch Audi Virtual Cockpit. The fully-digital instrument cluster is a feature that’s unique to the A4’s segment for now and it is mated to an advanced infotainment system.

Audi’s latest MMI (Multimedia Interface) has intelligent voice commands (optional feature) and is capable of giving the driver guidance to nearby refueling stations, restaurants and more on voice commands alone. If the driver sets a destination through the navigation system and then uses the voice command button to request a restaurant or a gas station, the infotainment screen will show the nearest options on the route, both close to the current position of the car and to the final saved destination.

The car is available with a 4G LTE connection and can even be ordered with a high-end Bang&Olufsen sound system. The 3D Advanced Sound System made by the Swedish specialized company has 19 speakers adding up to 755 watts and is fitted with a 16-channel, Class D amplifier.

For the customers wanting the new A4 with quattro all-wheel-drive, prices start at $39,400. The second trim level starts from $43,200 while the top trim level for this variant is $48,000. All prices mentioned above exclude destination charges, taxes, title, options, and dealer fees. 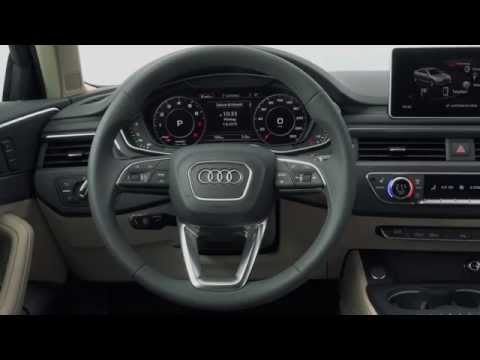