1 MINI JCW by Krumm-Performance Has 300 HP

3 MINI JCW What? This Is the Real Go-Kart Experience

5 2015 MINI JCW Hardtop Officially Unveiled: Will Show Up at Detroit
Car video reviews:
Up Next

The new MINI John Cooper Works hatch is about to get delivered around the world. Reviews will soon start pouring on the internet and the MINI enthusiasts will inevitably start complaining about its size, weight and other things.
1 photo
The most hardcore offering of the MINI line-up won’t have an easy task to try and prove itself, but I’m sure the management knew this beforehand. However, we can’t help but notice the impressive performance it brings to the table.

Under its bonnet will sit a 2-liter 4-cylinder turbocharged engine, the first of its kind and the biggest plant the British marque ever used. It will provide 231 HP and 300 Nm (221 lb-ft) of torque to the front wheels when in overboost (280 Nm otherwise). Those figures also make it the most powerful and the fastest MINI ever put in production.

Still, a lot of people will be unimpressed but not because the package isn’t good enough but because the competition has better specs. So what? I’d say to those critics out there. Drive it and then let me know if you didn’t like it.

On paper, a lot of things might seem to hold the JCW down but the video below shows performance on par with a lot more powerful cars. In this acceleration clip, the hatch goes from zero to 220 km/h (137 mph) like it was nothing and up to 200 km/h (124 mph) we reckon it would be on par with the Honda Civic Type-R that, in case you didn’t know, has 300 HP to rely on.

To go even further in detail, the Japanese car needs only 20 seconds to reach the 200 km/h (124 mph) benchmark speed. And if we’re to believe this video, the MINI needs about the same. Sure, it’s not scientifically proven but a good call nonetheless. 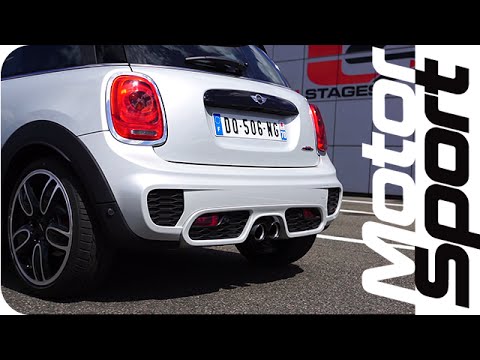