5 Shelby Baja 700 is an Extreme Take on the Ford F-150 SVT Raptor – Photo Gallery
Car video reviews:
Up Next

The time has come for the beast to be unleashed, and yes, that's a synonym for Ford Shelby GT350R Mustang going into production.
1 photo
Ford’s Flat Rock Assembly Plant was dressed in holiday clothes as the Shelby GT350R entered production described by its makers as "the most athletic Mustang ever, designed to tackle the world’s most challenging roads and race tracks while creating an exhilarating experience for the driver".

Leaving such poetic descriptions aside, we'll go once again through the specs of this pony car gone wild for track use purposes.

First, the under the hood goodies. The engine compartment is dominated by a 5.2-liter flat-plane-crank V8 engine responsible for producing a staggering 526 horsepower and 429 lb-ft (580 Nm) of torque. Also, the pack of mechanical goodies includes a 3.73 Torsen limited-slip differential and Ford's new MagneRide suspension system.

If that's not enough to impress the audience, please keep in mind that Shelby GT350R's carbon wheels cost more than a 2015 Ford Focus ST. Translated into American dollars, that's around $7,000 for each wheel or close to $30,000 for four wheels.

You can blame this spicy price on the technology behind the wheels. For example, the front rims of the Shelby GT350R are treated with ceramic coatings applied with a plasma arc gun that liquefies ceramic material. We're talking about an aerospace-inspired coating applied to the inner wheel barrel and back of the spokes as a thermal barrier against the heat generated by the high-performance brakes.

So there's no wonder officials like Bill Ford, executive chairman of Ford Motor Company, can only praise their product:

“This is a special day for all Mustang enthusiasts. We have taken the GT350 formula to the next level of innovation, style and performance. Today the legend continues.” 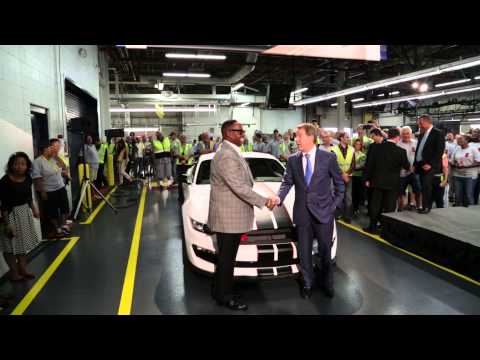