Gabriel Nica
The 2016 BMW 7 Series celebrated its world debut in front of a live audience in Frankfurt last week and it brought along with it the latest tech BMW has to offer. You would be safe to say that this is the most technologically advanced car the Bavarians have to offer today. And yes, that includes the i8 too!
1 photo
One of the gadgets that will surely make waves when it hits the street will be the new Display Key, a new way of looking and using the car’s key fob. It's a mini-smartphone that displays various info about your car’s state and functions and allows you even to control it from a distance.

No, we’re not talking about locking and unlocking the car, that’s something any fob can do, but we’re discussing the debated Remote Control Parking feature here that allows you to park your car by pressing a button.

Yes, the Display Key is a must if you want this function, and we guess a lot of people will go for it, even though it’s not all that practical. That’s because the car has to be perfectly lined up to the parking spot and only after that you’ll be able to slide it into place using the key.

However, that’s just one of the functions this gadget has. The display on it is touch-sensitive and works with swiping movements as well as simple pressing gestures.

On its top, you have four conventional buttons: one for locking, one for unlocking the doors, one for opening the trunk and one for honking the horn in case you don’t know where you parked.

Amongst the added functions of the Display Key, you’ll find checking the status of your windows, rolling them up or down if you want to, the state of the car’s alarm system and others.

Since all of this stuff will eat up a lot of energy on the long run, the key fob has a bigger battery inside that can be replenished by using the wireless charger included in the center armrest or via a micro-USB cable. If you think it may be too big or too gimmicky, you’re free to pass on this option, that costs $250. 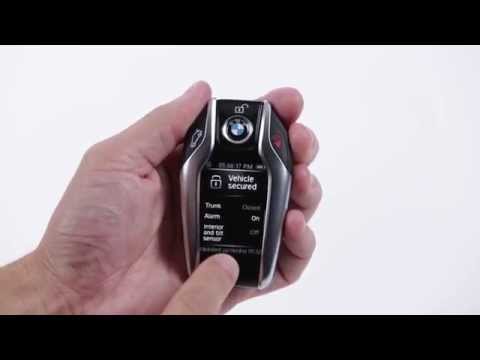