5 2016 Audi SQ7 Spied Inside and Out, Shows Off On the Test Track
Car video reviews:
Up Next

Once the new 2016 Audi Q7 hit the internet, we delivered everything you needed to know about the SUV. However, one thing was missing, but that's not something you find in the car's specs. At least, not right before launch.
1 photo
Audi's Q7 was put to the test by Euro NCAP, and its makers will be pleased to know it delivered as expected, as the European consortium awarded the new Q7 with five stars for safety.

Crash tests revealed the SUV does a good job in protecting both passengers found in the front seats and the backseat. Moreover, the 2016 Q7 received the “Euro NCAP Advanced” award for the multicollision brake assist system.

But that's not it. The new Q7 earned its place among the safest cars in this segment by showing good protection not only for adults (in frontal and side collisions) but also for pedestrians and children.

Below, you can find the SUV's safety ratings:

In case you didn't know, the Euro NCAP examinations are split between 4 crash tests (frontal impact, full width test, side impact and pole test) and one crash avoidance test.

Then, the Euro NCAP authority examines the automatic brake function and the forward collision warning features using three different scenarios: driving towards a stopped car, approaching a slower car in front and following a vehicle in front that at some point suddenly brakes.

Coming back to the 2016 Audi Q7, according to Euro NCAP conclusions, "the passenger compartment of the Q7 remained stable in the frontal impact." Moreover, "dummy readings showed good protection of the knees and femurs of the driver and passenger."

There's also a video below for you to get a better look at how these tests are being conducted. 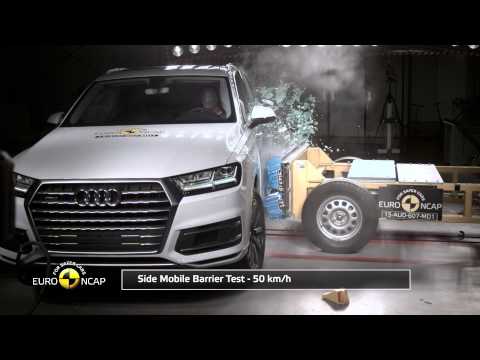