Sebastian Toma
Seven years ago, someone took delivery of a Porsche 918 Spyder, which was a limited-edition plug-in hybrid hypercar from the German manufacturer. All available units were sold out by the end of the previous year, so this was a rare and sought-after car even when it just reached its customers.
6 photos

From that moment, the same person only drove the 918 Spyder for 162 miles (ca. 261 km), and then stored it in a heated garage. It is unclear why just 162 miles were driven and not something "round," like 150, but it happened. Before storing it away, the owner probably washed it, but did not bother removing the water from the body.

Fast-forward to 2022, and the owner decides to part ways with the 918 Spyder. One of these open-top hypercars can now be sold for several times its original purchase price, and it seems that the owner figured out they were not planning to use it anytime soon. With the car market at the highest it has been in years, this low mileage example has the potential to change hands for a serious amount.

With that in mind, the dealership that has been tasked with handling the sale for their high-profile client has called Larry Kosilla for a helping hand. The founder and CEO of AMMO NYC are not at his first collaboration with Porsche Greenwich, and his touch was required for a vehicle that is estimated to be worth around two million dollars.

First, Larry had to power wash the body, clean the wheels, and then detail it to perfection. In just a day, Larry works his magic. The issue with this example comes in the form of the minerals that are on the body, which came from the garage it was stored in.

Larry describes those as being from "hard water," and they can be seen in the form of streaks and spots of dried water on the paint. While these may not matter that much on a more affordable vehicle, they have no place on a multi-million-dollar vehicle.

Second, Larry will also refresh the paint with the help of his trusty set of supplies, and he walks us through every step of the process.

Once the 918 Spyder was ready, Larry moved on to the Carrera GT that was stored next to it. The latter had a bit more miles on the clock, and it also required a bit more work when polishing was concerned, but the finished result also ended up looking as if it were brand new.

At the end of a long day, where Larry had to call a friend for help to be sure that he has enough time to cover everything he wanted, he received a special gift from the dealership's head honcho.

Both German open-tops now look as good as they did when they left the factory, and it can all before with a mixture of elbow grease, supplies that can be bought online, experience, and specialized tools. 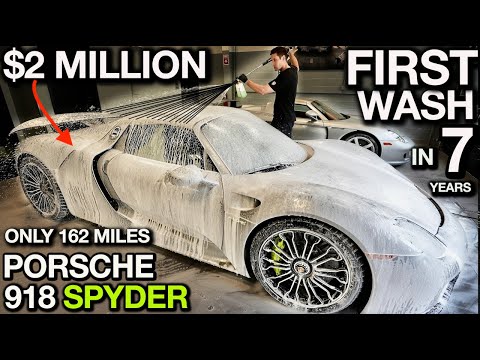