1 The Most Powerful MINI Ever Built Hits the Goodwood Track

4 MINI JCW by Krumm-Performance Has 300 HP

The 2015 MINI John Cooper Works is about to start being delivered around the world and, as is the custom, journalists get to review it beforehand, to let you know what to expect. As it happens, this isn’t just a new model, it’s writing history for the British brand.
1 photo
Usually, high-performance cars are being developed on top of regular ones, to save money and for other purposes. What happens is the manufacturer puts together a car and then thinks of ways to improve it. Well, for the F56 MINI JCW things went the other way around.

According to the manufacturer, they actually made the John Cooper Works version first only to develop the Cooper S and Cooper versions afterwards. This way, they made sure that all the cars in the line-up are up to par with what people expect from them in terms of driving dynamics and handling.

Having just stepped out of a MINI Cooper, I can personally confirm they did an excellent job, that little car with its 1.5-liter 3-cylinder engine offering a blast behind the wheel every time.

It’s the same with the Cooper S and things go to a whole new level behind the wheel of the John Cooper Works, apparently. Under its bonnet lies the most powerful and the biggest engine ever fitted to a MINI, a 2-liter 4-cylinder unit good for 231 HP.

You should also know that this plant is built by BMW in Germany along with the transmission and then shipped over to the UK where it’s transplanted inside the MINI. Oh yes, they insist on keeping the assembly in the UK, at Oxford.

Another interesting fact about this car is that it was actually developed around the brakes. A lot of people have complained about this aspect in the past and MINI and BMW were determined not to let that happen again. Therefore, the chassis and the entire car’s development was centered on the brakes that are impressive in size. The wheel arches and wheels themselves have been modified compared to the other MINIs to accommodate them and make sure they get plenty of air.

Overall, the new JCW should be a blast to drive if we’re to believe Nathan, the man behind its wheel in the video below. However, its price tag and niche positioning do make it an emotional buy, as all JCWs have always been. This is that one car that allows you to have fun at lower speeds, without being afraid of its might. 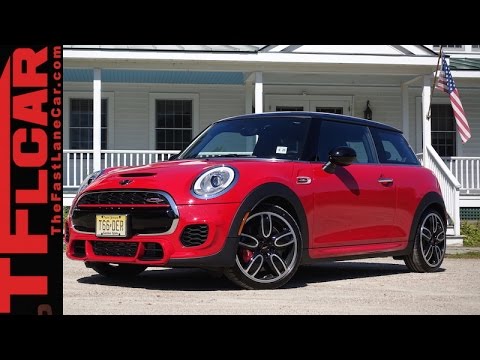