Despite the new MX-5 only receiving four out of five stars at the latest Euro NCAP crash tests, you should probably not ruffle your feathers before you learn all the details.
1 photo
Apparently, Mazda pulled an Audi TT on Euro NCAP and didn't fit the MX-5 with the latest crash avoidance technology. It other words, if the fourth-generation roadster had been fitted even optionally with an Autonomous Emergency Braking system, there is a possibility that it may have received the full five-star rating.

According to Euro NCAP, the Mazda combined good all-round performance in all crash tests. Pedestrian protection was exceptional mostly thanks to the deployable hood fitted as standard. That said, adult occupant protection during the frontal impact suffered a minor setback when the driver's airbag apparently “didn't have enough pressure to prevent the head from making contact with the steering wheel, through the airbag material.” Not to worry, though, since the dummy readings were good, and the overall protection was rated as adequate.

Thanks to the MX-5's “active” hood, pedestrian safety was almost entirely good over the entire surface in case of an impact, while the bumper scored maximum points for the protection of pedestrians' legs and pelvis region. All in all, if Mazda had chosen to augment its electronic stability control system, passenger seatbelt reminder and lane departure waring system with an autonomous braking system, there's a good chance that the final rating could have improved by one whole star.

It's the “Safety Assist” features that received the lowest score during Euro NCAP's tests. Only 64 percent out of a possible 100 percent having were achieved, just like the 2015 Audi TT from earlier this year. 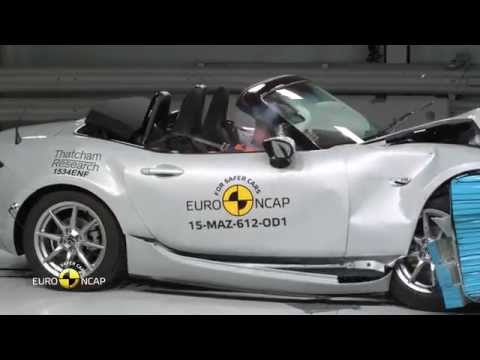