4 Next-Gen Camaro Rendering Has Bumblebee Written All Over It

The 2015 Ford Mustang is more aerodynamic that the model it will be replacing by the end of the year. No surprises here, as we haven't heard of an updated or redesigned model to be less aerodynamic than its predecessor. So what's new on the sixth-generation pony?
1 photo
First of all, Ford says it has spent twice as much time running aerodynamic and wind tunnel testing in order for that sleek and muscular body to have a lower drag coefficient and the whole car to return better fuel efficiency.

Testing results prompted engineers to add vertical slots in the outer edge of the front fascia, which channel air from the front of the car to openings in the wheel wells. They're called "wheel aero curtains" and direct the air across the outer surface of the wheel and tire, reducing drag.

To make sure the range-topping GT version delivers better handling at high speeds, Ford also worked on reducing the amount of air that gets under the car. Thus, the V8-powered pony was fitted with splitters and air dams below its new front fascia, as well as a pair of vents in the hood. These aerodynamic improvements claim to reduce drag force by three percent and improve fuel efficiency by one percent. 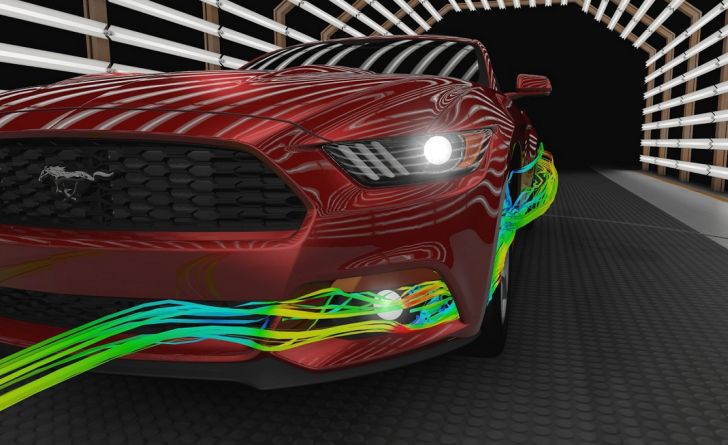 "We worked closely with the vehicle dynamics engineers that are tuning the chassis to make sure our experimental results for lift correspond to what they feel on the car when driving at the track," said Carl Widmann, aerodynamics engineering manager. "They provided us with some great feedback that we incorporated into our efforts in the tunnel, and the results are definitely noticeable when driving at high speeds."

When traveling at high speeds (the GT can top 155 miles per hour), the Mustang also needs to cool its engine by allowing air to flow through its front grille. To ensure cooling is properly done on all 2015 Mustang models, Ford created unique grills for each of the three available engines. The 2.3-liter EcoBoost, for instance, was fitted with active grille shutters that can lower fuel consumption by reducing drag at higher speeds when extra cooling capacity is not needed.

"Even with the classic, forward-leaning shark-bite grille and a more aggressive stance for the new Mustang, the aerodynamics team has made it slice through the air better for increased fuel efficiency while also keeping it planted to the road at higher speeds," said Dave Pericak, Mustang chief engineer. "The best part is that they met the challenge of creating the sleekest Mustang yet without resorting to a characterless teardrop shape."

EPA-estimated mpg figures aren't available yet, but expect each version to return more miles per gallon than the current models. The 2014 V6 is rated at 19 mpg city and 31 mpg highway (automatic), while the 2014 GT is good for up to 15 mpg city and 26 mpg highway (manual).