The guys from DragTimes are on a roll, once again. After a pretty long period without any serious races they are back with a vengeance. Some of the latest sport cars in the world showed up and entertained the audience.
1 photo
Amongst them was a 2015 Chevrolet Corvette Stingray, one of the most acclaimed cars of the year. Of course, the guys should've pitted it against rivals that had engines with similar power outputs, as the rules state in their competition. However, they put the American in the same league with the likes of the BMW M6, Jaguar F-Type R and Chevrolet Camaro ZL1 for some unknown reason. That's because the rivals have roughly 100 HP more...

Last, but not least, we have the contender. The Corvette uses a similar engine with a different output. It’s also a 6.2-liter V8 but this one makes 455 HP and 624 Nm (460 lb-ft) of torque. This too was available with the same gearboxes as on the Camaro until this year when Chevy decided to replace the automatic with their own 8-speed auto.

So, why is the Corvette racing against much more powerful cars? Well, you’d have to ask the guys from DragTimes. Even so, its performance is downright impressive. We can’t help but wonder how a Z06 would’ve faired... 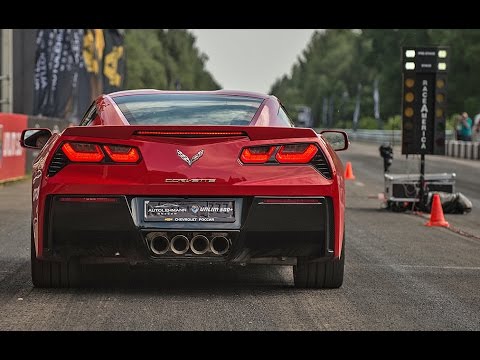