Normally, in an ideal world, the new Corvette and a BMW 135i wouldn’t race against each other on a drag strip. On the track? Maybe, and even then the BMW should be one of those fitted with either an M or a ’s’ on the boot.
1 photo
However, we don’t live in a perfect world, and things don’t always go according to plan in real life. This time, it’s the above C7 Corvette that takes a hit and yes, it’s from a BMW 135i, not the M135i, the 1M or the 135is.

As standard, the Bimmer used to have 300 HP, and 400 Nm (295 lb-ft) of torque going to the rear wheels from the 3-liter inline 6-cylinder turbocharged mill under the bonnet. Those days are gone though as the uploader says in the video description.

Judging by the trap speed and the 1/4 mile time, that little coupe definitely has more punch under the bonnet. The Corvette he’s running up against here has a 6.2-liter V8 under the bonnet making 460 HP and 460 lb-ft (624 Nm) of torque. Yes, those numbers are crushing for the standard BMW.

Furthermore, even with a 7-speed manual gearbox, it should destroy it but it’s not the case. As you can see, the BMW actually wins it, impressing the audience too. Sure, the difference is small, and the Vette started off slow but still, that’s impressive.

That’s also what led us to believe that the power output of the Bavarian should be somewhere between 350 and 400 HP. All we know for sure is that it has a new cold air intake and an ECU tune on-board. 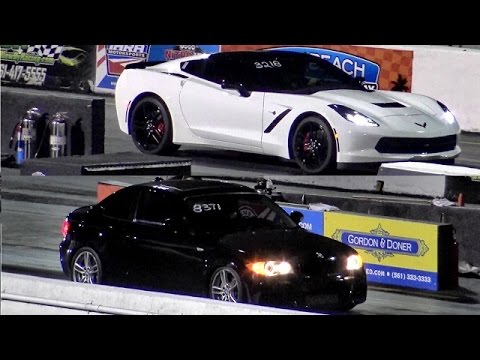