2 Francisco Chaleco Lopez Not Present in Dakar 2015, Calls It Quits with Motorcycles

5 Extreme Cross-Country Triumph Tiger 800XC by Icon
Up Next

Mihnea Radu
The all-new, second-generation Audi Q7 made its official motor show debut today at NAIAS. In front of a huge crowd of journalists, company officials explained the technological strides that have been made by this SUV.
95 photos

The first thing autoevolution's team noticed is that it looks different to what we expected. From the press photos we got the idea that it had a sort of jacked up allroad quattro body. But in the flesh, it looks like a real SUV, like a competitor for the ML and X5.

The interior is of superior build quality and brings features that we haven't seen on any other production Audi. For example, the MMI controller is now a pad instead of a wheel, so you could theoretically finger-paint a masterpiece with it. Many of the controls have been moved to the lower console and we liked the new gear selector, which feels Jeep-like in your hand.

The SUV also borrows a bit from other Audis. For example, the all-digital dash is like the TT's award-winning Virtual Cockpit, but seemingly even larger. The pop-up display, meanwhile, is A3 tech.

Even though the overall size of the new Q7 is smaller, the interior feel roomier, but we'll talk about that a little later. The one showed in Detroit had electrically folding 3rd row seats, which when tucked in revealed a cavernous trunk.


Knock on wood? No, knock on aluminum 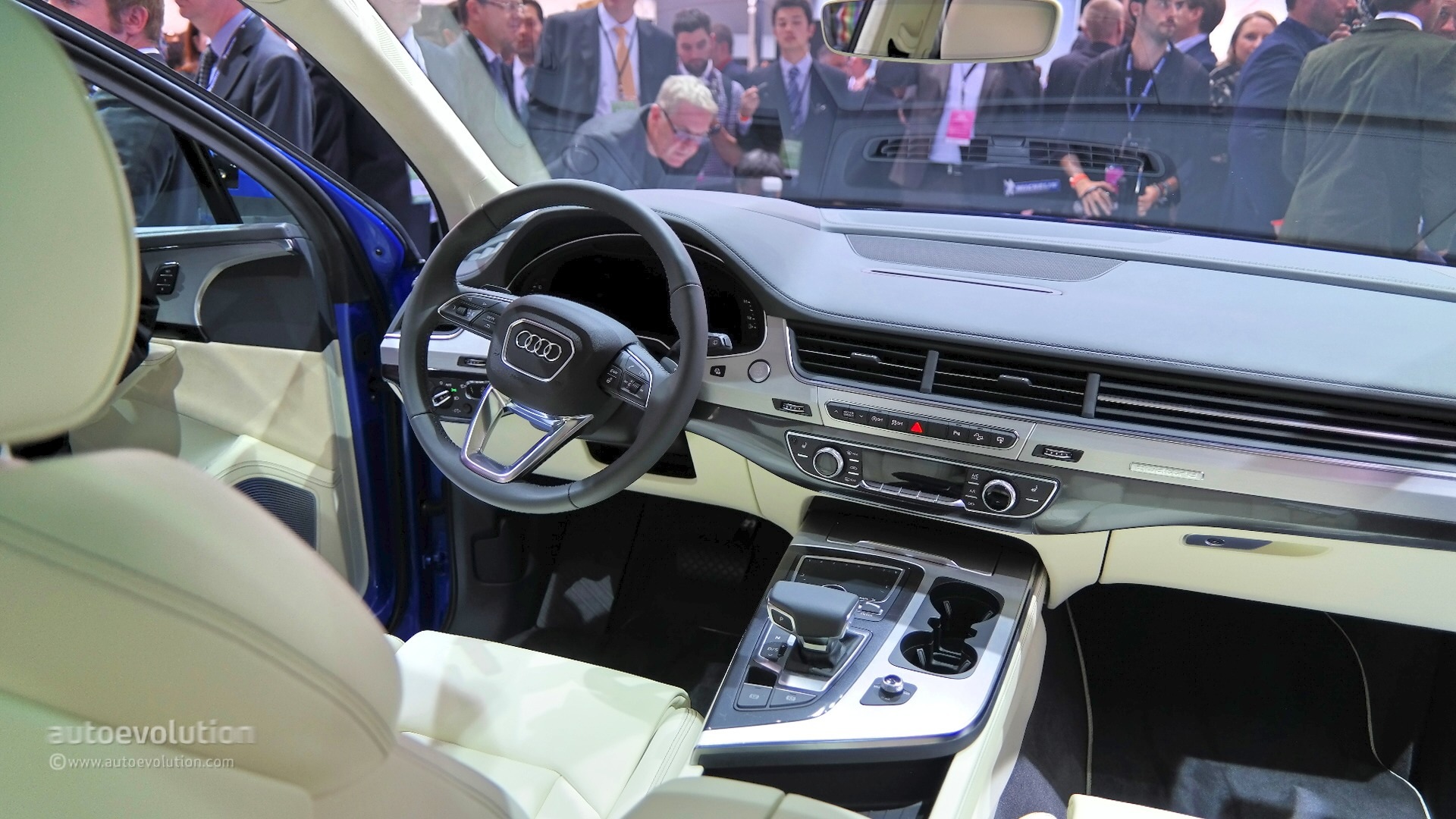 Once Audi had allowed us to approach the display car, everybody started knocking on the body shell in disbelief. That's because the doors, hood, front fenders and rear hatch are all made from aluminum, shaving a considerable chunk of weight.

Depending on the model, the new Q7 is up to 325 kg (716.5 lbs) lighter than before. That's equivalent to losing 4 average passengers. It's one of those "I can't believe it's not butter" moments, but with aluminum!

While other automakers are enlarging their vehicles, Audi had to shrink the Q7 since the last model was bigger than its segment deemed normal. The all-new SUV is 37mm (1.5 inches) shorter and 15mm (0.6 of an inch) narrower while the height has remained just about the same. Despite this, interior space is much better.

The front two rows of seats get 21mm of extra room and headroom has been boosted by 41mm front and 23mm rear of headroom, respectively. Still, the Q7 remains in the same class as the X5, not a rival for the Toyota Sequoia and Cadillac Escalade. 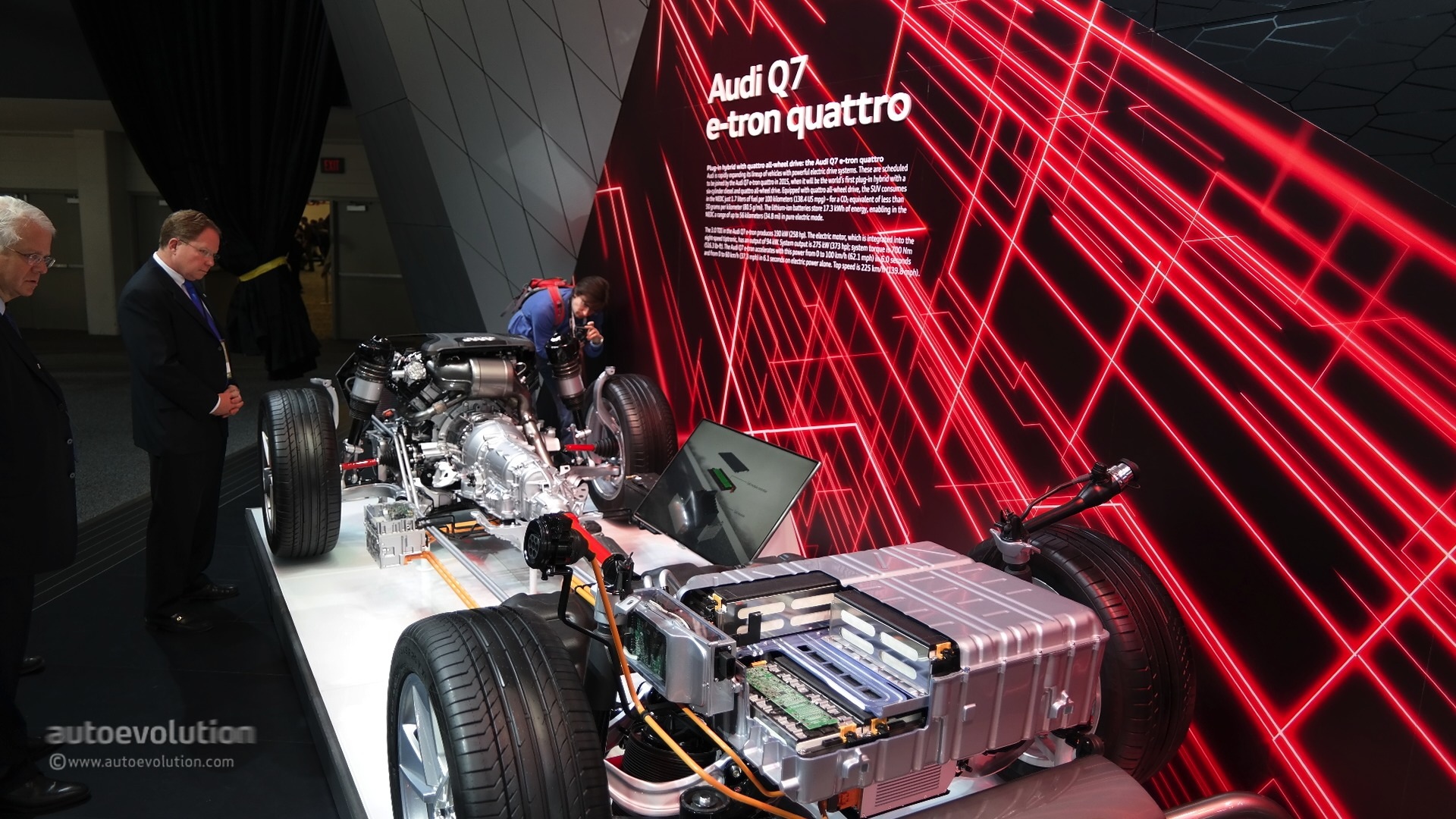 But the most important powertrain belongs to the Q7 e-tron, the first quattro plug-in hybrid ever put into production. It's based on a 3-liter diesel making 258 hp which combined to an electric motor can deliver mind-bending consumption of 1.7 l/100km (138.4 mpg US) and CO2 emissions of 50 grams.

Obviously, these figures are a bit misleading. If they were true, the Q7 would be able to run about 5000 kilometers or 3000 miles on a single tank, which is impossible. But the Q7 e-tron arrives a little ahead of the BMW X5 equivalent and will take advantage of growing demand for green SUVs.