As far as the VW Polo is concerned, the German supermini was always a case of "Honey, I've shrunk the Golf." And that statement stands true even after 39 years of continuous production alongside its bigger, C-segment-leading brother. Inspired by the strong individual personas of the latest iteration Renault Clio and Ford Fiesta, both the VW design and engineering teams were aware that the thoroughly Germanic Polo would've been left behind if the mid-cycle update failed to bring a bit of freshness to the small hatchback's table. And that's where the all-new Fresh variant comes on the scene.

Mind you, aesthetic and mechanical differences between the 2014 VW Polo 1.2 TSI Fresh BlueMotion we've taken for a spin and the pre-facelift fifth-gen Polo tested a while back aren't as dramatic as most would've expected. But you know what they say – the devil is in the details. It's easy to overlook what changes have been operated on the revised model as it failed to borrow even the slightest bit of stylistic wackiness and innovative hardware Volkswagen showcased on the outlandish GTI Roadster Vision Gran Turismo Concept and the ultra-economical XL1 plug-in diesel-electric hybrid.

But dig a little deeper and you'll get a glimpse of the Polo's change of heart... and attitude. As far as the Fresh trim level goes, individuality is the name of the game. Easily identifiable thanks to the Smurf-like Cornflower Blue paint job and tinted headlights and tail lamps, the exterior design of the Fresh further stands out from the rest of the Polo lineup with the gloss black heated door mirrors, 16-inch anthracite grey Portago alloy wheels and L-shaped chrome inserts adorning the lower front radiator grille.

The visual feast is carried on by the cabin design as well. As soon as you open the door and hop inside, the first elements certain to catch your attention are the grey and white dashboard further beautified by Dark Rhodium Fine plastic ornaments surrounding the touchscreen infotainment system, air conditioning unit and gear lever. The funky Ceramique design pattern of the cloth seats is another hallmark of the Polo Fresh, along with the sporty tri-spoke leather-wrapped steering wheel enhanced by white stitching and black plastic inserts. 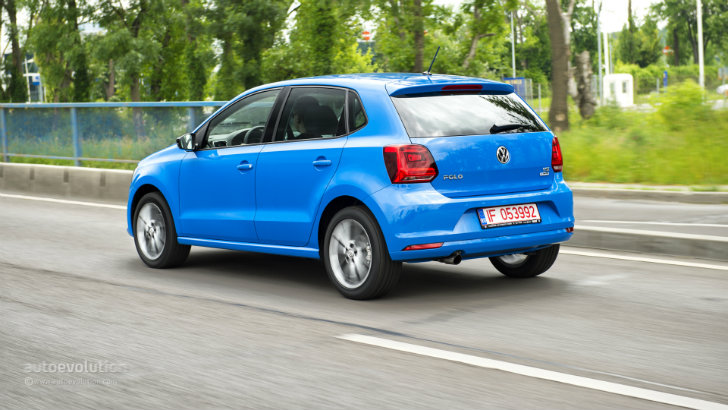 Don't think for a moment that the new model's cabin design cuts corners on practicality. Two cupholders, an assortment of cubby compartments, better cushioned seats, a retractable armrest and a cooled glovebox make life easier for the driver and passengers.

The cavernous 280-liter boot can easily swallow a week's worth of shopping and the rear seats fold completely flat, thus offering a hassle-free loading experience and a whopping 952 liters of cargo space.

Although the narrow A-pillars and generous greenhouse make the Polo an exceptionally easy car to navigate in the city, the high placement of the boot parcel shelf might prove troublesome for park-shy drivers. What about rear parking sensors? Well, our test car wasn't equipped with that optional extra.

Quality-wise, the 2014 VW Polo 1.2 TSI BlueMotion is just what you would expect from a typical German hatchback. The upperside region of the dashboard is made from a rubbery soft-touch material, while all the knobs and switches, even the indicator stalks, have a reasurring damp feeling to them, being a true delight to operate. Speaking of which, ergonomics are pretty good as well.

Heck, even a blindfolded person that has never seen the inside of a Polo would effortlessly locate the warning lights button or air-con dials. The Germanic fit and finish is so at home with the revamped Polo that even the glovebox lid is damped. Did we mention that the doors make a solid thump noise when closed, harking back to the bulletproof build quality of the Mercedes-Benz W124?

Nevertheless, the dominant aspect as far as the cabin goes is the sheer quietness. Even at motorway speed levels, top-notch soundproofing will keep things all nice and serene on the inside except for a tad of wind and tire roar noise. As for downsides, it's worth mentioning the two biggest we identified: whilst headroom in the back is sufficient even for tall adults with afro hairdos, there's limited space for stretching your legs properly and a slightly intrusive transmission tunnel protruding through the footwell.

Another aspect that may disappoint customers is the hard plastic that makes up the lower dashboard. The 6.5-inch color capacitive touchscreen infotainment system doesn't do sat-nav without paying extra, but in standard guise it will let you connect your phone via Bluetooth and play prety much everything from Dusty Springfield to Daft Punk with crystalline sound quality via the 6-speaker USB-compatible stereo. 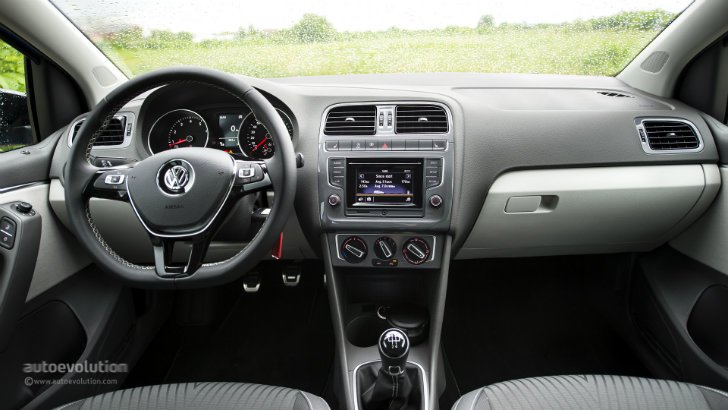 So how does the new Polo stack up as far as driving dynamics are concerned? The simple answer to that is pretty fair, but let's go a little deeper with the details, shall we? Even though this is an eco-friendly B-segment city dweller equipped with BlueMotion technology, elements such as the aluminium pedals, accurate and easy to use five-speed manual transmission and the nicely contoured steering wheel might trick you into thinking that this Polo has a bit of GTI DNA built into it.

In the first minute or so after you start driving this thing, you'll be surprised by the firmness of the throttle pedal. To put it simply, engineers made the gas pedal harder to press than on other Polo models because a BlueMotion variant is all about fuel economy, and bursts of acceleration are certain to mess up the frugality of the 90 horsepower 1.2-liter turbocharged gasoline engine. However, you'll get used to the limited loud pedal modulation in no time at all.

Another feature that helps keep the economy figures as low as possibile is the stop and start system. As expected, it works by automatically turning the engine off when the vehicle comes to a standstill, with the gear lever in neutral. But unlike the large majority of other stop and start systems, this unit doesn't get confused by repetitively pressing and releasing the clutch, a typical situation whilst travelling in slow-moving traffic.

An unique aspect the VW Polo Fresh BlueMotion brings to the economy-conscious B-segment is the standard regenerative braking system that recuperates wasted kinetic energy when the car is coasting or decelerating. Fortunately, this addition doesn't affect the feeling of the brake pedal as some might imagine. Further more, the brake pedal has a very progressive nature to it and a beefy biting point.

The electro-mechanical steering system is a first on the Polo and we're happy to tell you that although it lacks the sensitivity a hydraulic assisted rack usually offers, it makes up by giving you a good feel of what the front wheels are doing at any given moment and by ironing road imperfections gracefully. Trying to be the best of both worlds renders this unit less involving and direct than the one fitted to the Ford Fiesta, but it's a worthy travel mate in and out of town nevertheless. 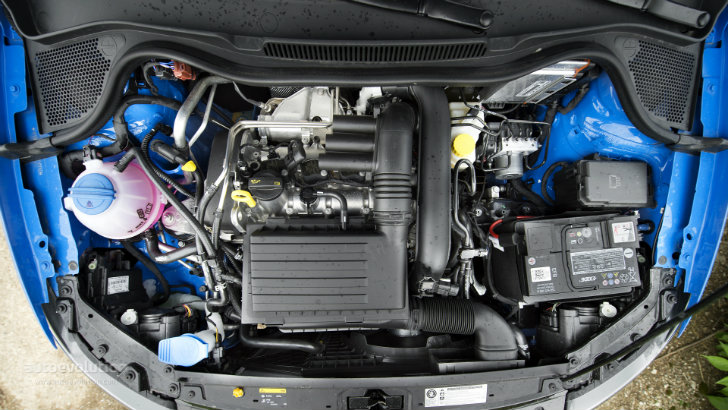 Unlike the MQB modular transverse matrix chassis that underpins its bigger brother, the facelifted Polo still uses the Volkswagen Group's A05 (PQ25) platform. For the first time, the Polo is offered with optional electronically adjustable dampers. Our test car wasn't equipped with that piece of kit, but the standard dampers are pretty well sorted out for this kind of vehicle.

At the front, the VW Polo integrates McPherson strut type suspension, while the rear is taken care of by a semi-independent torsion beam. On paper, it sounds like the Polo gives its more expensive Audi A1 sibling a run for its money, but in real life things aren't really that way.

Although the Polo hovers gracefully over moderate imperfections in the ashpalt, Belgian blocks or railroad lines unsettle the suspension, making the car feel fidgety. Coupled to the 16-inch rubber and nicely weighted steering, the revamped Polo doesn't handle with the same zest the Ford Fiesta tackles B-roads laden with tight corners.

Without any shadow of doubt, this car feels most at home in the urban jungle and on motorways. In fact, it's hard to think of a better all-rounder supermini that puts up with whatever the city throws at it better than the Polo does. We've also found out that the punchy 1.2-liter TSI turbocharged mill isn't a big drinker even if you're in a bit of a hurry. In a heavily congested city, the trip computer showed that the inline-four used just 6.5 liters of petrol per 100 kilometers, which roughly translates to 43.4 UK miles per gallon.

If you're mostly a motorway cruiser, we're happy to inform you that the turbocharged engine drinks under 5.4 liters (52.3 UK mpg) of fuel if you have a steady right foot and keep overtaking maneouvers to a bare minium. Anyway you look at it, the economy figures are remarkable for a petrol unit when you compare them to what the Renault Clio's 1.5-liter dCi turbo diesel mill boasts with. Moreover, the air-con and heated seats were on most of the time we've been driving the little German hatchback.

So how do we sum up the 2014 Volkswagen Polo 1.2 TSI BlueMotion Fresh at first glance? Well, it falls short from being as funky as some of its younger segment rivals, but still offers a breath of fresh air that will surely win over customers which haven't ever considered the Polo as an alternative buy. Overall, there are very little things that made us go "Eww" and a bucketload of fair to very good features.

But be advised: the cheapest petrol-powered Fresh model starts at about €14.700 ($19,991; £11,945), which is a hefty extra over the entry-level Trendline trim. Tick a few boxes from the options list and the retail price soars to Golf VII money, which is not cool. Just keep it sensible and you'll find yourself the happy owner of a very economical and versatile supermini.