4 Chris Harris Pits The E 63 AMG S-Model Against The M6 Gran Coupe and XFR-S
Car video reviews:
Up Next

While some people may argue that the addition of all-wheel drive may have hindered some of the hooning qualities of certain high-powered AMG models, the truth is that its advantages weigh a bit more than that, both literally and figuratively.
1 photo
Apart from right-hand drive countries, the S-Model version of the Mercedes-Benz E 63 AMG comes with 4Matic all-wheel drive in standard, and its performance is so high that it can even trounce earlier Nissan GT-R models in a drag race without using the launch control function on either cars.

The 585 hp and 800 Nm (590 lb ft) of torque have no trouble reaching the pavement and transforming into neck-snapping acceleration figures. This almost two-ton sedan can reach 100 km/h (62 mph) in just 3.6 seconds from a standing start, while the quarter mile is covered in under 12 seconds without even using the launch control system.

How does it fare against a much more powerful 2012 Ford Mustang Shelby GT500 then? Well, let's just say that the 4Matic all-wheel drive system is much more efficient than you would expect, with the 662 bhp Shelby getting its tooshie spanked by a German premium sedan that is mostly laughed off as a taxi in Europe. 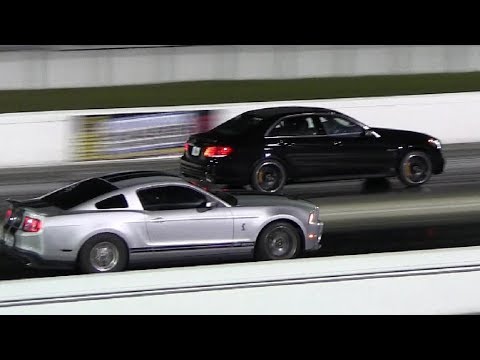