3 Geco, the Shape-Shifting Motorcycle of the Future

5 Voxan Wattman, Probably the Most Awesome Electric Motorcycle of the Planet
Car video reviews:
Up Next

Molot is Russian for “sled.” The Chack Molot should have also received some prefix, such as “super” or “ultra,” as we're dealing with a completely different type of fun. Molot is a new Russian superbike concept advertised as being the safest machine in the business. Let's make the introductions...

2015 Chak Molot, the Safest Motorcycle Around?

A “safe motorcycle” is a term that’s sometimes met with a smile, as motorcycles have never exactly been the safest transportation method around.

However, as the streets grew busier and the power and top speed of the bikes increased, the number of crashes and fatalities also took a hike, prompting motorcycle manufacturers to add more and more safety-focused features and technologies in their machines.

Steering dampers and ABS were followed by traction control and, more recently, by electronically-adjustable suspensions linked to complex onboard computers that analyze the road conditions and constantly make real-time adjustments to a series of factors. 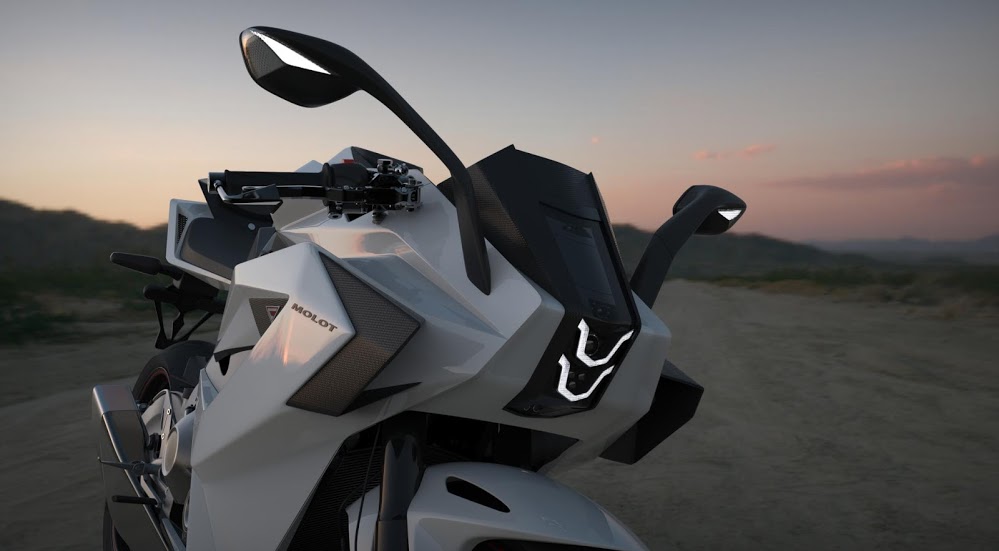 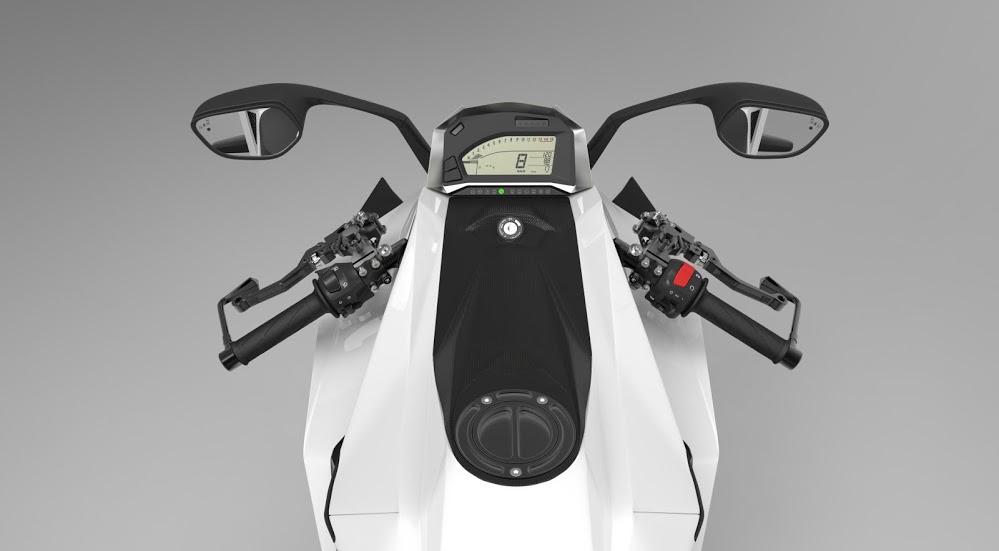 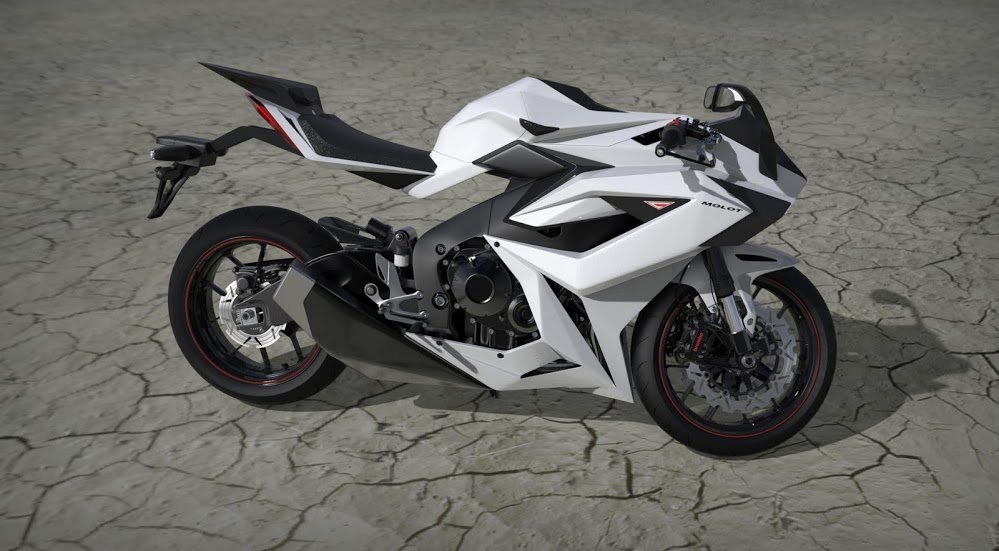 Seasoned riders will agree that one of the most important elements in bike safety is the human factor, as it can compensate for most of the hazardous scenarios, using foresight and anticipation, trained reactions, and continuously-improving riding skills.

Still, the Chak Molot is not about riders and their training level. This bike brings forth a technology that was until now reserved to automobiles, and that seems to have finally found its way in the two-wheeled world.A high-tech Honda
Molot started out as a 2013 Honda CBR1000RR ABS, touted by Igor Chak as being “the best motorcycle on the market.” However, the liter-class machine got a ton of upgrades that ranged from frame parts to the exquisite bodywork.

Since high-tech is the keyword around which the Molot build was centered, about 5% of all the parts have been manufactured from metal and plastic using 3D printing technology. A lithium-ion light battery replaced the standard one and the rear cowl also houses electronics and a USB port for charging smartphones. A front-facing HD camera records everything 24/7 and stores the images on an onboard HDD.

As a specified quota is reached, the dash displays an alert, prompting the rider to download the footage. Truly convenient, for both leisure rides and as a proof in case of a crash. Even though, when it comes to crashing...Prediction, just like when it comes to the human behavior
They say it's better to prevent than to cure and, by all means, this saying works in the motorcycle world perfectly. And this principle is the one who made Sankt Petersburg-based Molot creator Igor Chak think about the “safer bike.”

Basically, the whole thing relies on analyzing the traffic surrounding the bike and making decisions in case the rider is unable to. That is, when he or she makes mistakes. 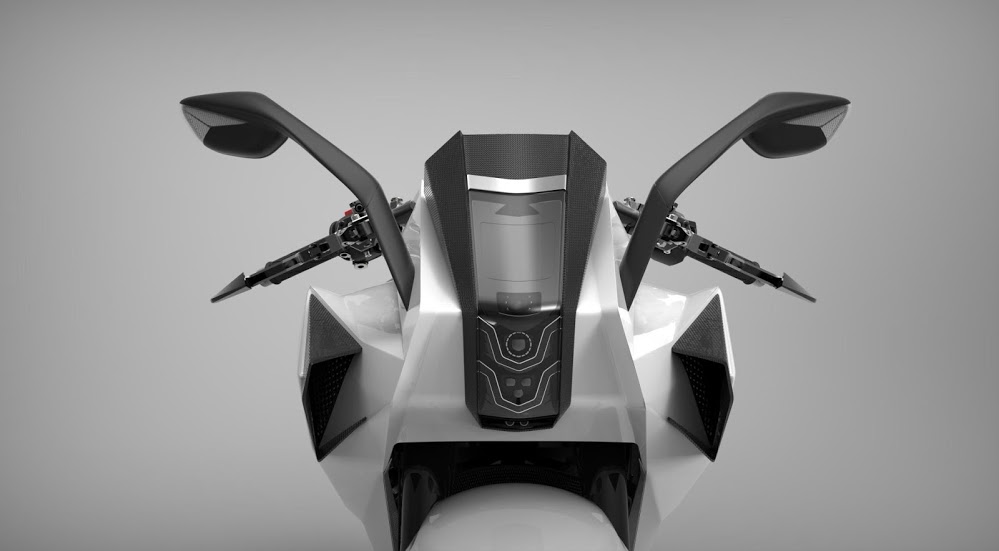 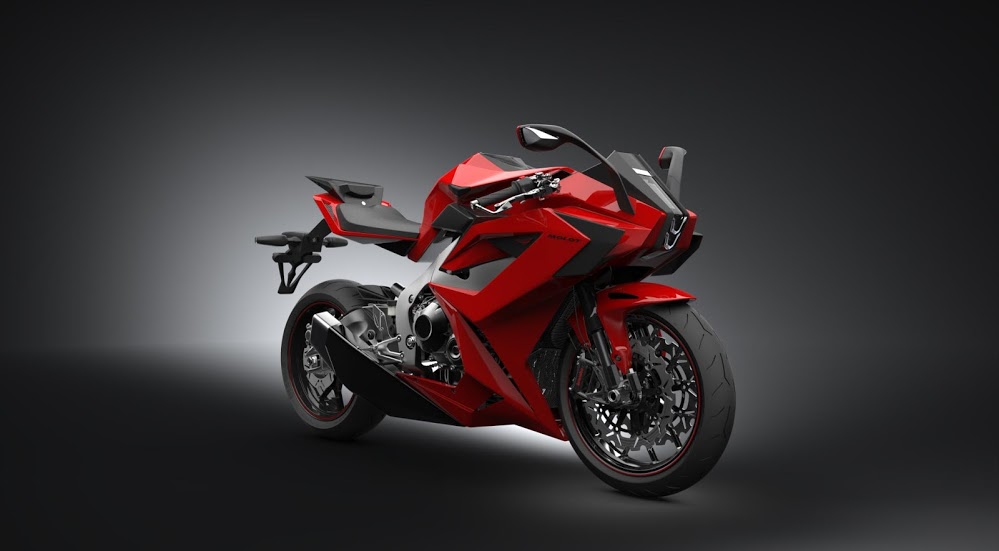 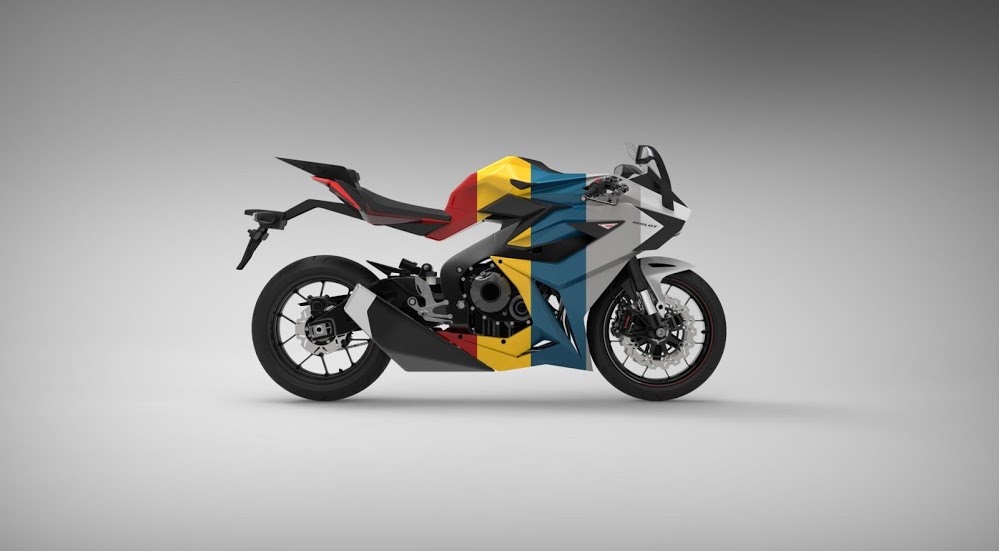 Igor adapted a Predictive Emergency Braking System (PEBS) onto the bike, granting it access to the bike's throttle and brakes, and the system is supposed to react when you don't.

Molot's intelligence relies on HD cameras, proximity sensors, gyroscopes, and two radars, and all these are used to determine whether the casual ride is about to transform in a hazardous scenario.

The radars in the front are used for short- and long-range object detection and they constantly feed data to the PEBS computer. When an object is detected and the chances for impact reach a certain level, the PEBS system is sending warnings to the rider.

A dedicated warning light blinks on the dash and a light vibration is sent to the grips of the bike, informing the rider about the risk increase.

In case the rider fails to adjust his/her speed or trajectory, the system sets grip vibrations to the maximum level and starts to brake. Subsequently, failure to react triggers full-force braking.

The Chak Molot is equipped with anti-locking brakes, so hard braking will not cause the rider to lose control of the bike.

Now, some might say that the system is overkill and promotes lack of attention. It may be so for certain riders who fail to understand that the first and most important safety mechanism is their own brain and training.

Unfortunately, there are many riders (and drivers alike) who rely too much on the safety systems of the vehicles they operate on the road and fail to exercise a decent level of self-induced safety-awareness. And I guess no system could ever compensate for their lack of skills, save for a self-driving machine. Or not operating a vehicle at all.

Back into the tech camp, Chak Molot's PEBS can save the day, especially when small rider errors occur... and they do occur, truth be told. So instead of panicking and deathgripping the brakes, the Molot pokes us and manages to react safely before we do and before the situation gets out of hand.Lane-switching and out-of-control situations
Molot is also loaded with other similar technologies that make riding safer and more enjoyable. For example, the Lane Departure Warning System (LDWS), which is a valuable backup for riders who often forget to check with their mirrors before changing lanes. 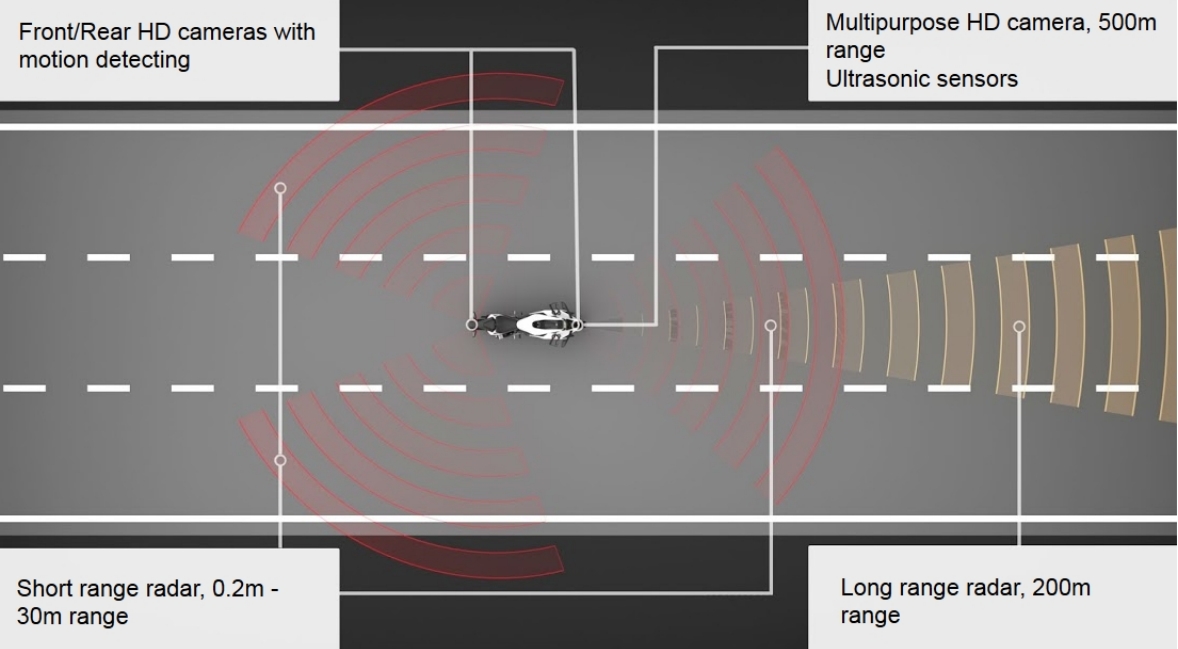 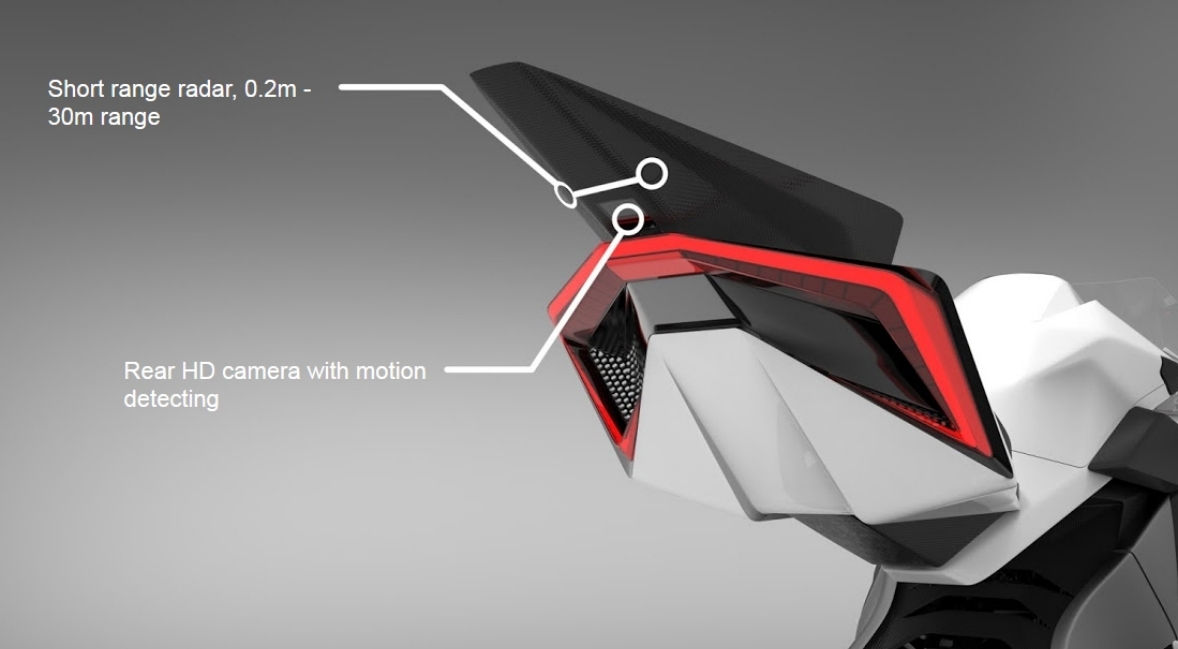 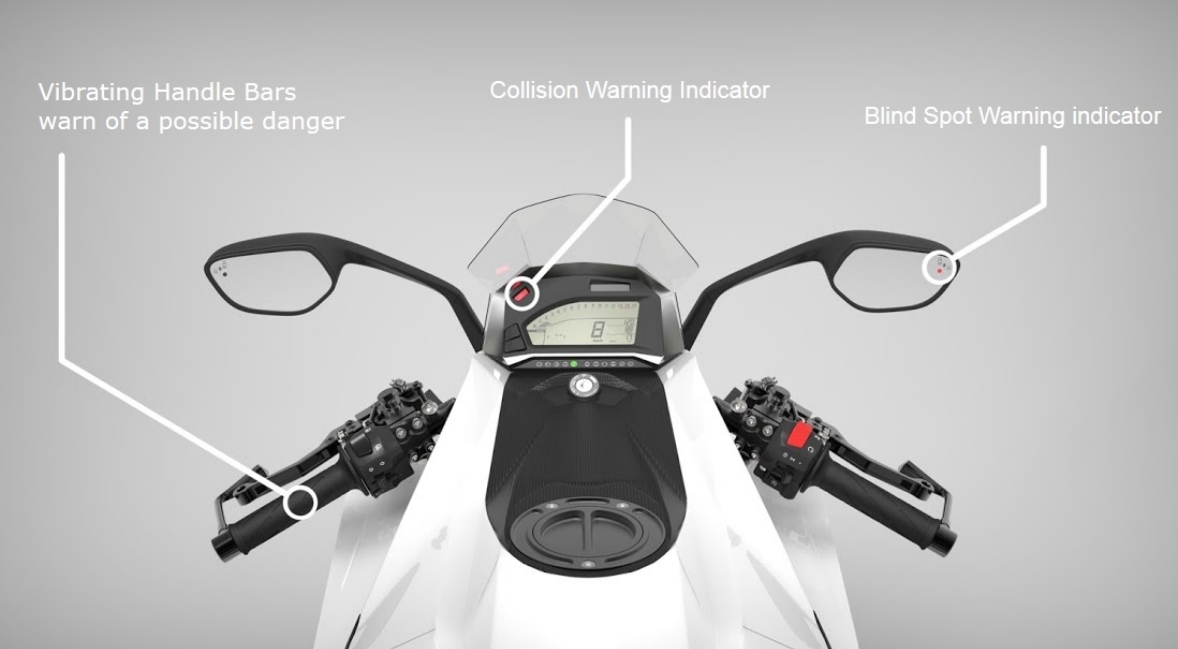 Two sensors are located in the bike's tail, one on either side, and they will detect when you start to swerve out of your lane involuntarily, sending out a vibration warning to the bars.

In case they also detect other cars approaching from behind at a decent distance as advertised in the prototype drawings, such a feature could help reduce the number of crashes happening when changing lanes. And this could work well for everybody, regardless of whether the rider or another road user is at fault.

A gyroscope analyzes the leaning angles and vibrations of the Chak Molot and compares them with the predefined scenarios. Thus, the computer can detect abnormal behavior of the bike and cut the throttle.

Now, this is a tricky feature as, in some scenarios, the rider actually needs full control of the throttle, whether it's for slightly rolling it off, maintaining the same position, or even revving up. Granting the computer control over the throttle may not be the best idea, but the feature can be turned off.

All in all, the Chack Molot, advertised as a 2015 model, is full with technologies that could indeed make the difference between bringing the bike safely at home and being involved in a crash.

In case the systems prove to be fully functional and will not fail like they did when Volvo tested their automatic brakes, we might see this technology embedded in future bikes.

Igor Chak and his team do not mention the speed limits for maximum efficiency PEBS operation, which in Volvo's case was 35 km/h (22 mph).

Still, it's quite obvious that no safety system will be effective when riding like a mindless baboon at 160 km/h (100 mph) in the city. But, for decent riders, it may save the day.

There's no word on pricing or availability for the Chak Molot, so until further information is provided, we'll all have to settle for that magic “2015.”