Nobody expected the Tesla Model S to be a race car when it was unveiled. Don’t get us wrong, it’s still not a race car but it can be quite fast in a straight line, especially in a drag race where all that down-low torque proves essential.
1 photo
What we have here is a pure example of that as a P85 Model S races a tuned BMW 335i. Of course, the result of the race couldn’t surprise anyone that knows a thing or two about the cars but it’s still interesting to watch them go at it.

This particular one has had some work done and is now sporting new downpipes, an AFE cold air intake and JB4 Tune. Unfortunately, we don’t know just how much extra power those bits and pieces gave the Bimmer but we can rest assured that it didn’t reach over 400 HP or 500 Nm (369 lb-ft) of torque.

The Tesla, on the other hand, can’t be tuned that easy and it came to drag stock. In its case as well, we have no idea which model it is but for the sake of appearances, we’ll guess it’s the top of the line one, that has 421 HP and 601 Nm (443 lb-ft) of torque at its disposal, from 1 RPM. That means instantly. That’s also what probably won this race for it.

However, it’s not just that it won that shocked us (after all, we’ve seen Teslas take down M5s before) it’s the way it did it. That 3 Series had no chance whatsoever. Of course, the driver makes a difference as well but in this case it didn’t seem like either of them did anything work. Sometimes you can’t mess with the laws of physics.

PS: as incredible as it seems, we’d still take the BMW. Why? At least it has a beautiful sound to go with that lack of performance... 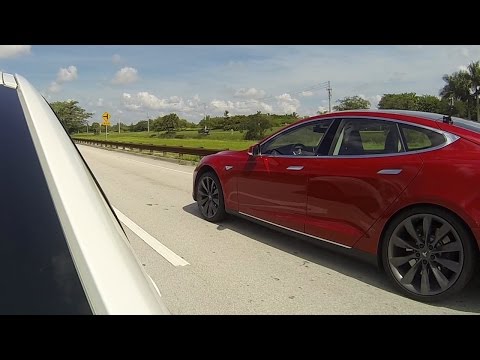