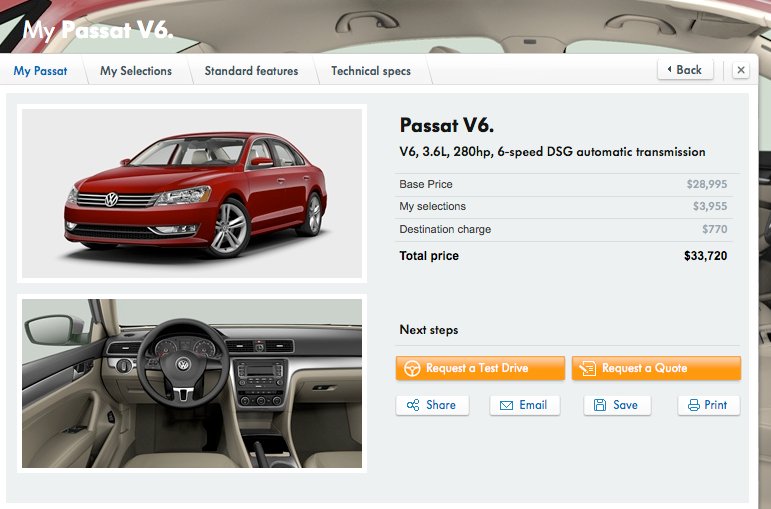 Ever since the North American division of Volkswagen announced pricing for the new Passat, we figured there’s something fishy going on. At a starting price of only $19,995 (plus $770 in destination charges), the 2012 Volkswagen Passat couldn’t have too much to offer.

The German automaker has just launched the online configurator for the new Passat, which has already started arriving at US dealerships.

As we previously reported, prices for the 2012 Passat start at $19,995 and go all way the way to $32,950. As you’ll see for yourself if you decide to use the online configurator to see whether you’ll afford the Passat of your dreams, there is a choice of three trim levels, S SE and SEL.

Base 2012 Passat models are powered by a 2.5-liter 5-cylinder engine developing 170 horsepower. Standard transmission choice include a 5-speed manual while an optional 6-speed automatic is available.

However, you can also go for a 2.0 TDI Clean Diesel 4-cylinder unit making 140 horsepower. Mated to a 6-speed DSG transmission, the 2012 Passat TDI gets 43 mpg on the highway and a range of approximately 800 miles. The range-topping 2012 Volkswagen Passat is powered by a 3.6L VR6 units producing 280 horsepower. Mated to a 6-speed DSG, the 2012 Passat VR6 will get 28 mpg on the highway.

As you can see in the adjacent image, a top of the line Passat V6 with DSG automatic, finished in Opera Red Metallic, with a Cornsilk Beige Vienna Leather and standard 18-inch alloy wheels will cost you some $33,720 (with $770 in destination charges included). But maybe you should give a try yourselves, by following this link.