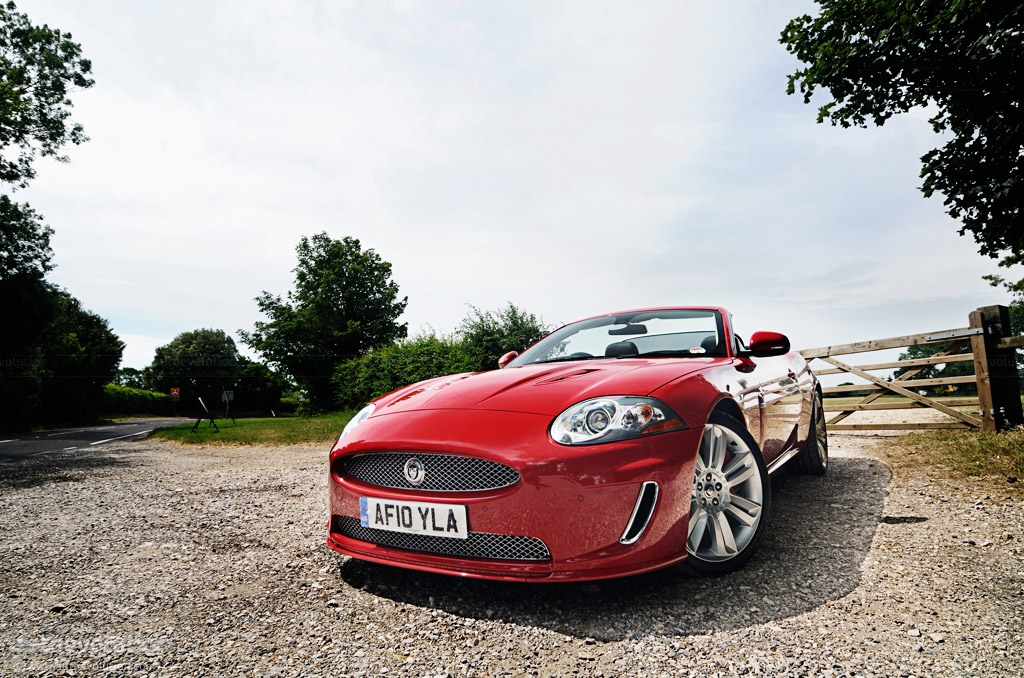 "The car is the closest thing we will ever create to something that is alive."

Only four years ago, in 2006, Jaguar had a completely different model line-up. Who are we kidding, Jaguar was a completely different company. Back then they were still under the Ford umbrella, while the majority of their four-wheeled felines were no more than extensive facelifts of other models from their past. Every new generation had similar, if not almost identical design cues with the one preceding it.

Fast forward to 2010 and Jaguar now belongs to Tata Motors, along with Land Rover (who would've thunk it?), while their model line-up looks like something the late Sir William Lyons would probably describe like "This is blasphemy. This is madness." in a low-pitched voice.

The current generation of the XK was unveiled in 2005, at the Frankfurt Motor Show, while its convertible version only a few months after - at the 2006 NAIAS, in Detroit. It was designed by Ian Callum, the very same man who also penned cars like the rare Nissan R390, the Aston Martin DB7, the Vanquish and the Project Vantage Concept.

Dubbed internally as the X150, the car's design was first previewed by the 2005 Advanced Lightweight Coupe concept car. More importantly, the car's aluminium monocoque chassis was also first seen on the aforementioned prototype, making the XK the second Jaguar made almost completely from this lightweight material.

The two XKs (coupe and convertible, ed) were praised by the automotive press for their somewhat more modern design, especially compared to the then Jaguar line-up. This is despite having similar general proportions and an almost identical grille with the original penis-hood E-Type. What they weren't exactly praised for were the rather old-school engines, which weren't the most powerful, nor the most technologically advanced powerplants for their time.

Since 2009 though, all XKs have received a completely new (and modern) generation of engines. We're talking about upgrades like spray-guided direct injection, variable camshaft timing and a whole bag of lightweight aluminium bits and pieces. By the way, both naturally aspirated and supercharged versions of the new 5-liter V8 conform to EU5 and ULEV2 emissions regulations. 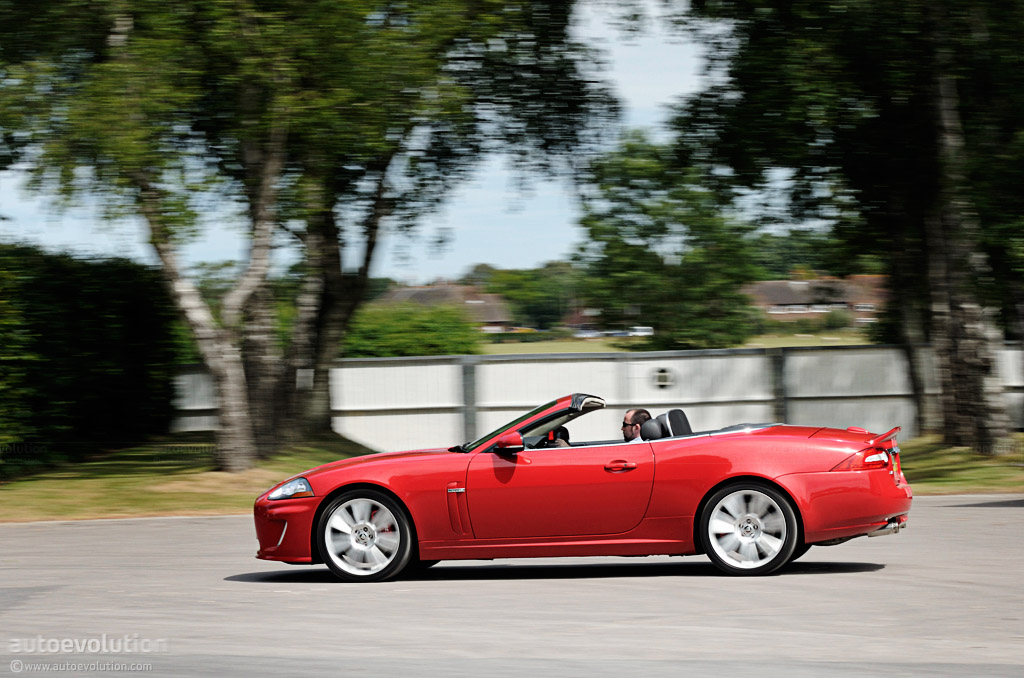 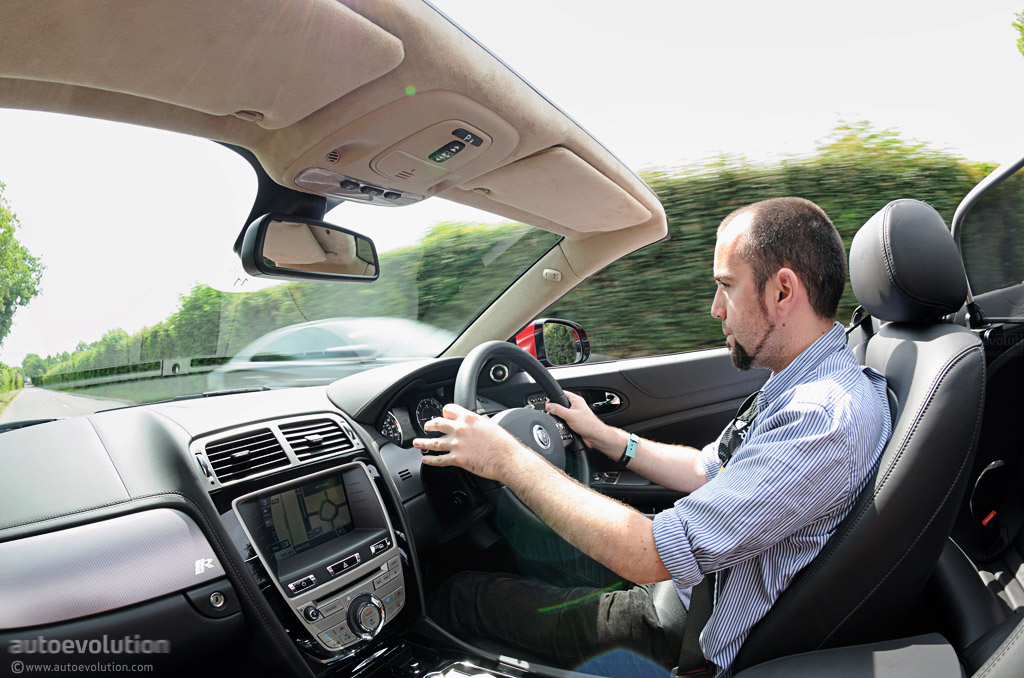 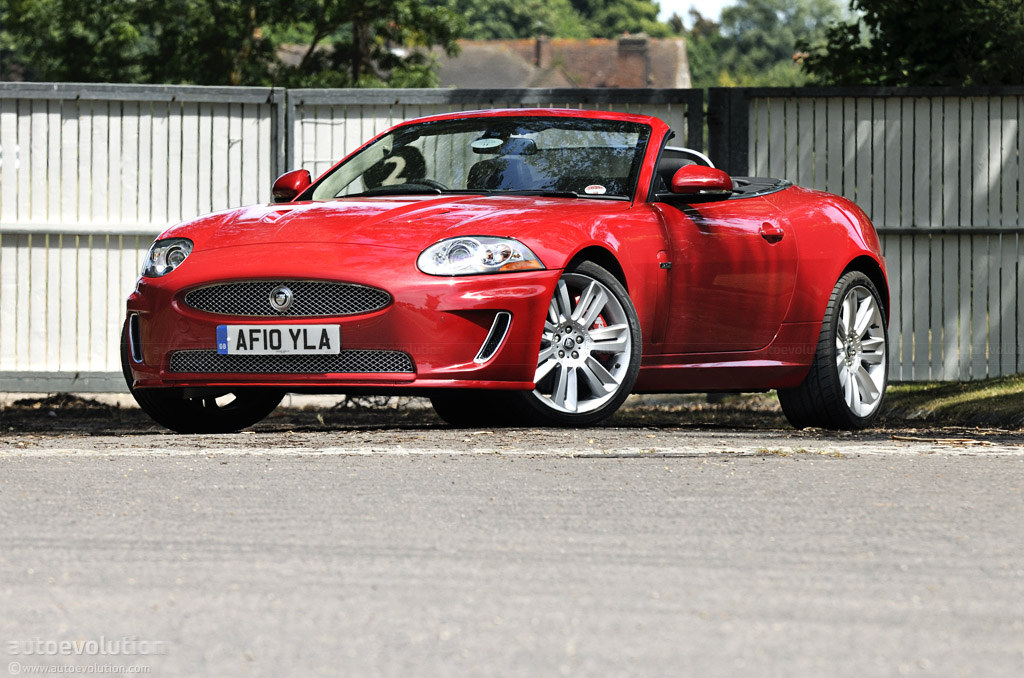 As some of you know by now, a couple of weeks ago we had the chance to be invited by Jaguar to test drive pretty much all of their cars on and around the Goodwood circuit. In other words, this happened on their home turf, in the UK. This is just another part of that coverage. We had the chance to drive all XK versions, including the Coupe, Convertible, and R with and without Speed pack, but we had the most driving time in a "look at me" red XK-R Convertible.

The five-liter supercharged V8 in our test car delivered an outstanding 510 horsepower and 625 Nm (491 lb ft) with the help of both old-school and new-school technologies. Part of the old-school package is of course the sixth-generation twin vortex supercharger, which, besides the whistling sound it makes from the distance, vastly improves low end torque.

As for the new-school technologies, we should probably mention the direct injection system, the variable valve, intake and exhaust control. Speaking of exhausts, the semi-active system present on the facelift-ed XK-R is so much fun it hurts. We mean that in the good way, of course.

At low rpm it rumbles like a pack of rabid bears foraging for food, while at high rpm it resembles the sound made by a swarm of wasps flying through a metal pipe. In other words, the sound is so mental it becomes addictive in about 4.8 seconds. Coincidentally that is the same time required for the XK-R Convertible to reach 100 km/h (62 mph) from a standing still. Not too shabby for a car weighing 1875 kilograms (4133.7 pounds) without passengers. 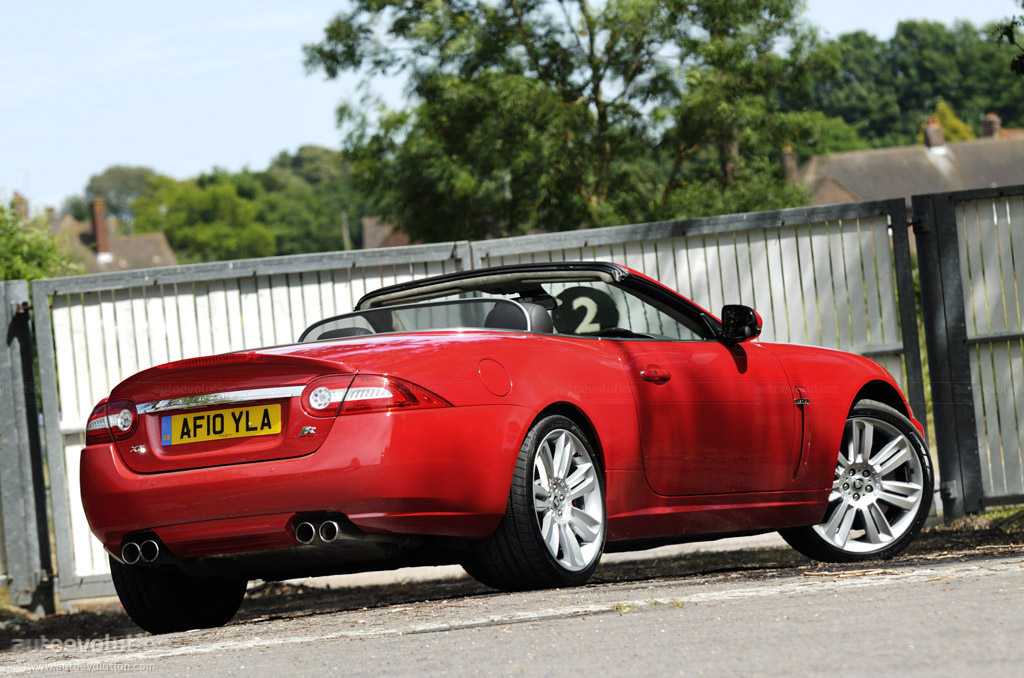 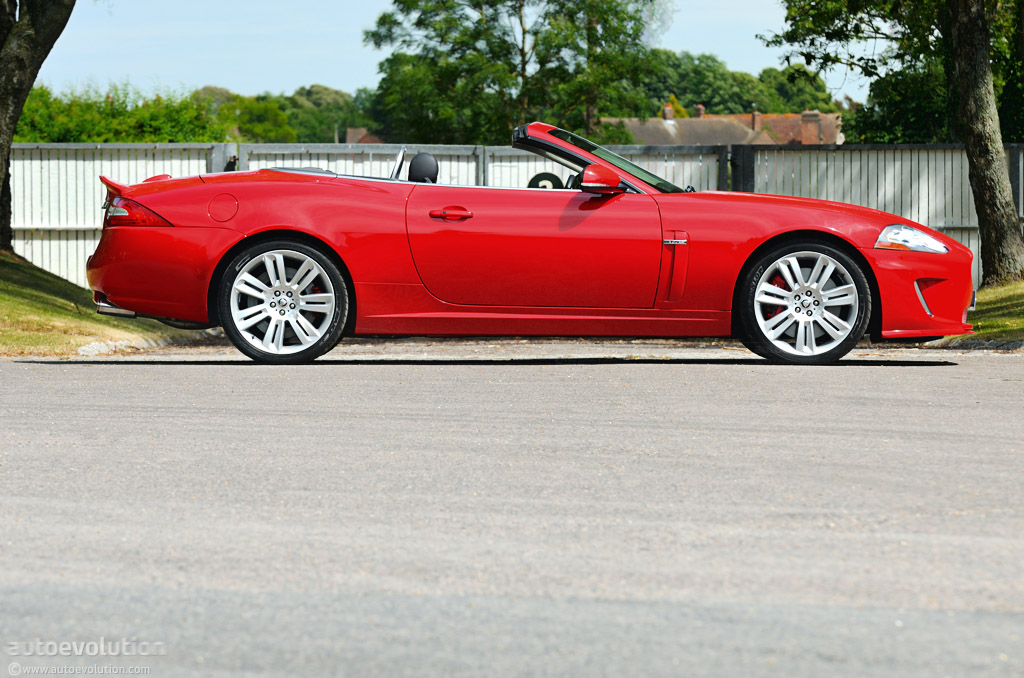 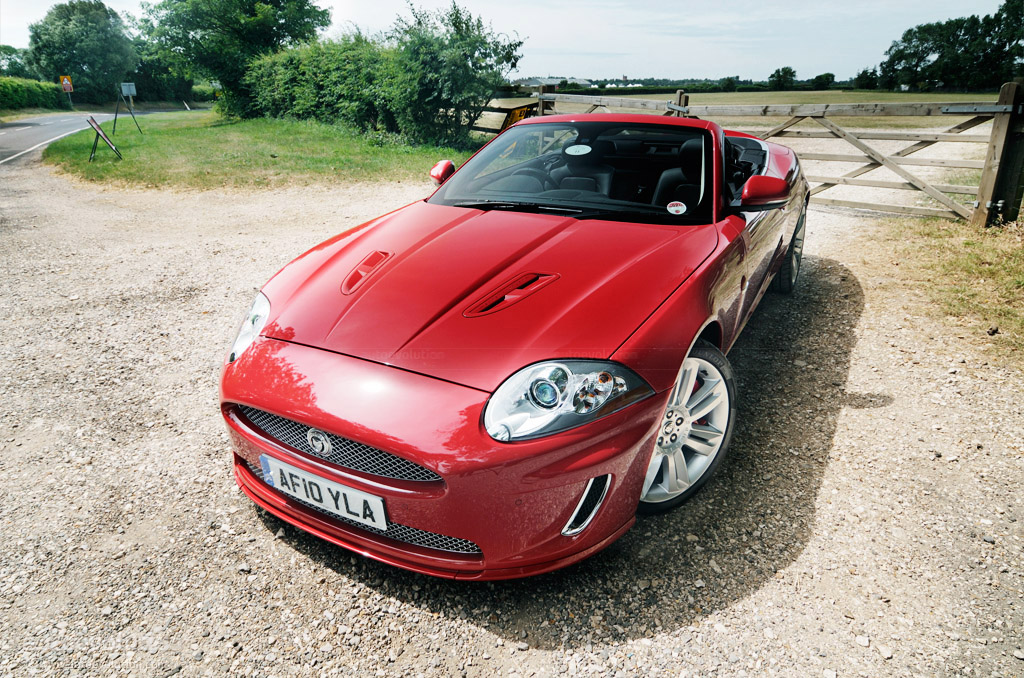 Speaking of its weight, despite showing rather similar numbers to those of a full-size SUV on paper, the XK-R Convertible feels as nimble as a sports car weighing much, much less. Obviously, this thing is no Lotus, but it's far from having the wafting credentials of a Bentley, for example.

However, the overall driving comfort is at the highest level for the performance it delivers. The electronically-controlled dampers can be set to either normal, which is a rather comfortable setting, or a much sportier one, which doesn't exactly punish your spine but it can certainly hug the road in a more... efficient manner.

The stiff yet comfortable suspension would at times make us forget this is a convertible (read: lower chassis stiffness), since the XK-R's handling was so responsive, no matter the speed. Both on road and on the track, the car's poise is simply magnificent. With the help of the suspension, combined with the explosive oomph from the supercharged V8 and the somewhat fast six-speed automatic, every straight would shorten in seconds, while the bends would straighten like they weren't even there.

On the whole, the spirit of fast British gran turismos lives on with the current XK-R, while the convertible option only adds more to the experience, especially (and most likely) in the summer. Our take is that Jaguar's DNA – design, performance and luxury – can be experienced best in a fast coupe (ergo, the XK-R Coupe), but the Convertible would be the better weapon of choice if you live in a sunnier place. In other words, the XK-R, no matter its version, is probably Jaguar's best GT car in history.