1 2010 Hyosung Motorcycles Get Injected for Australia
Car video reviews:
Up Next

2011 Hyosung ST-E3 Electric Scooter Goes to the US 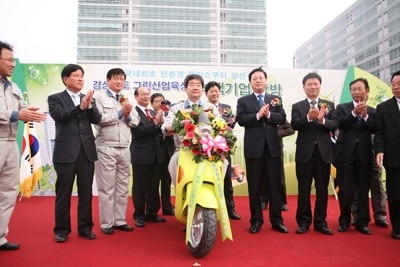 South Korean manufacturer Hyosung celebrated the launch of an electric scooter as part of its North American product line-up for 2011. The product in question is the Hyosung ST-E3, a vehicle that runs on a proprietary lithium-polymer battery that can be charged in a household electrical outlet in three hours.

ChangWon City will promote the electric scooter by hosting the company flag on the main street of the city, displaying it on the billboard sized electronic display at the City Hall of ChangWon, and by placing the product in the local ChangWon newspaper.

Hyosung will launch the ST-E3 in United States, Canada, and South America. The company has also announced plans to produce more electric models in the future, including 2.5kw and 4kw level eco-friendly vehicles.