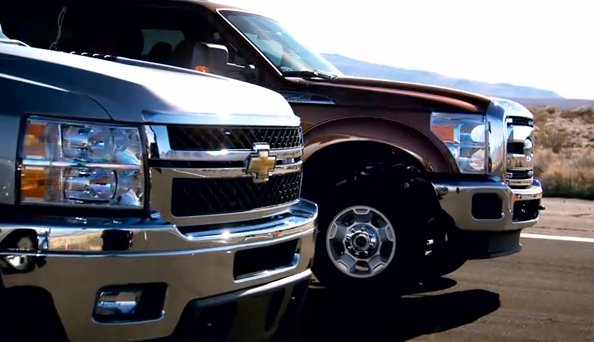 While trying to show the Silverado HD with Duramax diesel engine and Allison transmission is facing the competition, Chevrolet has taken the heavy-duty pickup battle to the test track in real-world tests of capabilities. Competitors faced by the 2011 Silverado HD were the diesel-powered 2011 Ford Super Duties, and in some tests, the 2011 Dodge Ram HDs.

The tests include acceleration, passing, and braking tests, all conducted with a loaded bed, or in some cases, a loaded trailer.  Other tests measure the effectiveness of the exhaust brakes on long downgrades and the stiffness of the frames during twist-ditch simulations.

"We wanted to get away from spec-sheet comparisons and show how these trucks perform in the real world," said Rick Spina, global vehicle line executive for full size trucks. "To do so, we engaged an independent company to test the Silverado HD with the Duramax diesel and Allison transmission head-to-head with the competition, and record those tests for everyone to see."

"We worked hard on the Duramax-Allison combination to deliver torque smoothly throughout the entire power band," continued Spina. "That is what gives us class-leading acceleration."

For example, in a zero-to-60 test of three-quarter ton models with a 1,500-pound load, designed to simulate merging onto a busy freeway, the Silverado 2500HD outpaced the F-250 Super Duty, 7.66 seconds to 8.36 seconds, despite the slight advantage in published horsepower and torque ratings for the Ford.

Silverado HD pickups also showed a similar advantage in acceleration tests on a 7-percent grade, and in passing tests at both sea level and at 6,000 feet while towing loaded trailers.