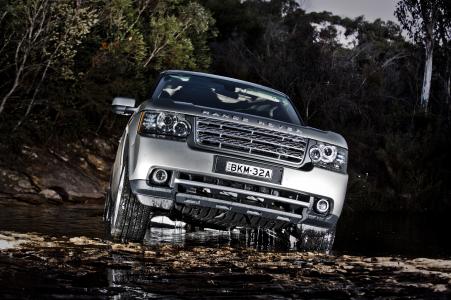 The 2010 Range Rover Vogue is projected to go on sale Down Under in mid September and the new generation will bring a lot of improvements in almost every single area of the car, including engine performance, fuel economy and CO2 emissions.

First of all, the interior. Range Rover is offering a dual view touch screen - allowing both the driver and the front seat passenger to view two different media files at the same time - as well as a 12-inch TFT screen that replaces the traditional instrument cluster. Safety features include Adaptive Cruise Control, Blind Spot Monitoring, Automatic High Beam Assist and a Tow Assist function plus a surround camera system.

There will be several engines available, as it follows:


The TDV8 pricing starts at $155,000 while the 5.0 V8 is priced at $158,000 (before statutory and delivery charges). Range Rover Vogue TDV8 Luxury, which includes features such as heated leather steering wheel, climate control windscreen and front side glass, Adaptive Bi-Xenon headlights and venture cam, is offered with a price tag of $179,500.

"The Range Rover Vogue 10MY is a considerable step forward for what is already regarded as the one of the world's most complete luxury vehicles. New engines deliver formidable power, efficiency and customary Range Rover Vogue refinement, and new technologies, such as the dual view screen, deliver a world first. Like its legendary predecessors, the Range Rover Vogue 10MY continues to set the pace," says Roger Jory, Land Rover Austraila's General Manager.