5 Stock C8 Corvette Drag Races Against Front-Engined V8 Muscle, Only Loses Once
Up Next

2008 Bugatti Veyron Drag Races Four Different Teslas, Does the Bug Still Got It?

The Bugatti Veyron wasn't so much a car as it was a statement. Built simply because Ferdinand Piech, the CEO of the Volkswagen Group at that time, insisted, it famously sold at a loss despite costing close to two million dollars.

Volkswagen had a reputation for building reliable yet boring cars, and even though carmakers such as Porsche or Lamborghini were also part of the Volkswagen Group, the image of its main brand, Volkswagen, tended to spread over the entire automotive conglomerate. Piech felt it was time for the ultimate halo car, and in 2005, Bugatti built it.

It's hard to overestimate just how much hype the release of the Veyron caused back then. Pretty much everything about it was ridiculous: it came with an 8.0-liter W16 engine with four turbochargers (quad-turbo) for a maximum output of 1,001 metric horsepower (987 bhp). It was built to be the fastest production car and given you had a long enough runway, it was indeed able to achieve that. Sure, it would burn through the fuel like a kid through candy and it had a habit of tearing its tires much more quickly than the owner's financial adviser was comfortable with, but nobody really cared.

As we all know, the venerable Veyron has since been replaced by the Chiron, yet the 15-years-old hypercar is still something most people go their entire lives without ever seeing on the street. It's the epitome of exoticness - you know, despite being a German car made by Volkswagen.

The thing about the Veyron - as well as all modern Bugattis - is that it also has the performance to back up all that intrinsic arrogance. We could give you some cold hard figures, but instead of that, how about watching a series of four drag races against some newcomers?

The Veyron is up against a quartet of electric vehicles from Tesla. Sadly, it's not the full S3XY family, but rather just the more stuttery SS3X acronym. Well, on the other hand, if the Veyron can beat a Model 3 Performance, racing it against a Model Y Performance would be redundant.

Luckily, the guys behind this extended trial of the Bug knew their things and organized the races in the right order to keep the suspense up. That means the Model 3 Performance comes first, then the Model X P100D, then the Model S P100D, and, finally, the 2021 Model S Performance, the best Tesla has to offer until the Plaid version comes out.

You can watch all four races below, as well as some of the prep work. If you're all about the action, it starts just after the 4:00 mark. 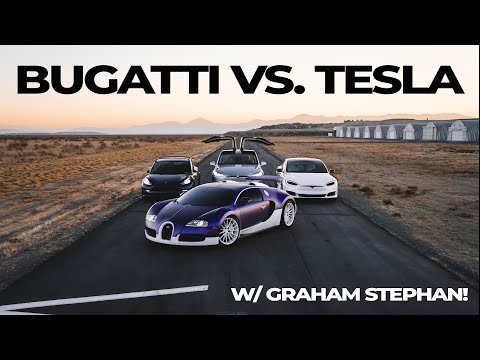