Sometimes we yearn for certain things, only to realize that they are out of reach. And then we have one out of two options. We either let it go, or we do what mankind has been doing for millennia. Improvise. Adapt. Overcome. And thus, the engine swap has become a popular thing among automotive enthusiasts.
12 photos

But as with all things in life, any decision that you're going to make will be judged differently by people. Some will approve it, while some will look down on you for doing things that way. And it's the same every single time. Be it that we're talking about people swapping piston-engines into RX-7s, or non-Ford engines into Mustangs, and the list can go on and on. As we've seen this year, someone has even swapped a K-series engine into a Ferrari.

And speaking of K-swaps, we all know that these are affordable, tough little engines. And if you're thirsty for more power, but you just don't have the budget to justify a top-shelf engine from a renowned manufacturer, what else is there to do? Nick lives in Canada, and he seems like a genuinely cool dude, and while I was listening to his story, I just had to agree with his point of view.

Because the original engine on his 2006 Porsche Carrera 911 S was only good for about 355 horsepower. And he got bored with that figure, especially as he got to see multiple Hondas making 500+ horsepower, without too much of a headache, and without having to spend a ton of money. I guess owning a dyno can sometimes be discouraging, especially if you keep tuning cars with more powers than yours.

So he came up with the idea of bringing a 2014 Honda Civic Si engine into the equation. He slapped a Garrett G35-900 Turbo onto the K24Z7 unit, shooting for anywhere between 500 to 600 horsepower, which is more than you would expect from a stock 911 Turbo made in the same period. Nick has been working on the car for about two years now, and he just recently managed to dyno it for the first time.

As expected, the idea of a lynch mob being put together was immediately flung into the air, while other people showed their support towards the idea. At the end of the day, this isn't the first K-swapped Porsche ever, and if you'll do some digging, you'll find out that a 930 model had a similar engine back in 2017. In his defense, Nick presented cost-related facts, and everything starts making more sense as he does.

He spent around $1,000 for his engine, which had around 100,000 miles (160,934 km) on it at the time. He did the math and noted that for about $3,500 you can have a built, bulletproof, 600 horsepower engine. And seeing that his original Porsche engine was still in functioning order, I imagine that selling that unit provided the whole budget for the conversion. 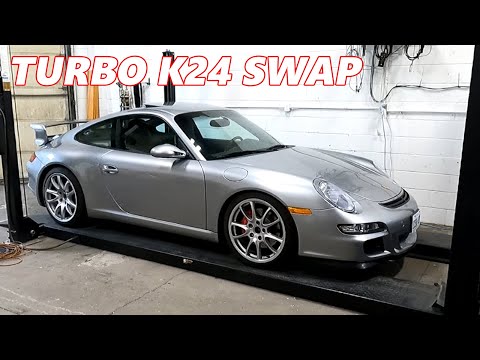